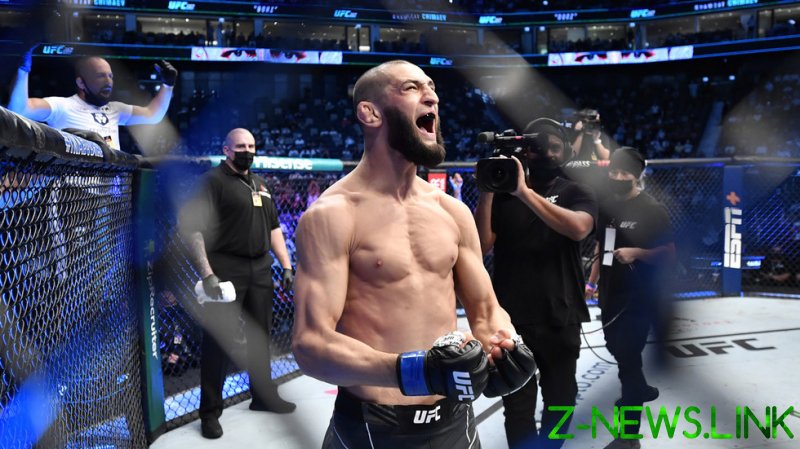 Undefeated UFC ace Khamzat Chimaev has extended a formal training invitation to Conor McGregor as the Irishman plots his route back to the top of the sport after suffering a gruesome broken leg in the cage last year.

McGregor remains in recovery after suffering a clean break just above his left ankle in what proved to be the Irishman’s second successive defeat against rival Dustin Poirier in Las Vegas last summer. He subsequently had surgery to implant a metal rod in his leg to stabilize the damage and is primed to return to the cage sometime this summer, with full contact sparring predicted to return next month.

But with McGregor having won just one of his last four fights in the UFC Chimaev, who has become one of the sport’s most intriguing characters since debuting for the organization in 2020, says that he can help reignite the fire in the Irishman’s belly which propelled the Dubliner to two consecutive world titles and the status of being the sport’s biggest name.

But after he spent the last several weeks in what appears to be a reclamation project in helping former title contender Darren Till emerge from his own slump, Chimaev says that McGregor is more than welcome to join him and Till in his Swedish training base.

“If you want to come back we will help you, we are waiting for you in our camp,“ wrote Chimaev on social media, addressing McGregor along with a photograph of him alongside Till.

Chimaev’s offer to assist McGregor is a significant departure from previous comments he made about the former champion. He revealed in 2020 that he flew to Dublin to confront McGregor for comments that he made about Khabib Nurmagomedov but was detained at the airport by Irish police and was held in a cell for eight hours before being put on a flight back to Sweden.

“At that time, I was fighting as an amateur or a pro record of 1-0 when that happened,“ he said in 2020. “It is that time when he insulted Khabib, and he also was talking about Zubaira (Tukhugov). At that time, nobody knew who I was. He was also talking about another guy who’s also Chechen.

“I don’t remember his name, but he told us he knocked him out in a sparring session. My mind was blowing up at the moment, but I’m living here very close to him. I was thinking that I would catch him in the streets or at the gym and beat him up. This is what he deserved.

“That time, there were guys literally in uniform… Yes, there were, and they told me, ‘You cannot go anywhere.’

“But I didn’t get what they meant. At that time, my English was very bad. Even right now, it’s not that good… They drove me to the police station and kept me for eight hours.

“No, there wasn’t any interrogation at all. I was just kept in a cell. I waited for maybe eight or nine hours. I was doing push-ups and squats. They didn’t even bring me food. Then after a while, they told me, ‘You have to go back to Sweden.’

“Honestly speaking, I wanted to beat him up,“ Chimaev added.

It remains to be seen if McGregor will accept Chimaev’s offer – something which, at this point anyway, seems very unlikely – but Till has spoken at length about how training alongside Chimaev has reinvigorated him after some poor recent performances.

Chimaev, meanwhile, will take on his biggest test to date when he fights former title challenger Gilbert Burns on the main card of UFC 273 on April 9.