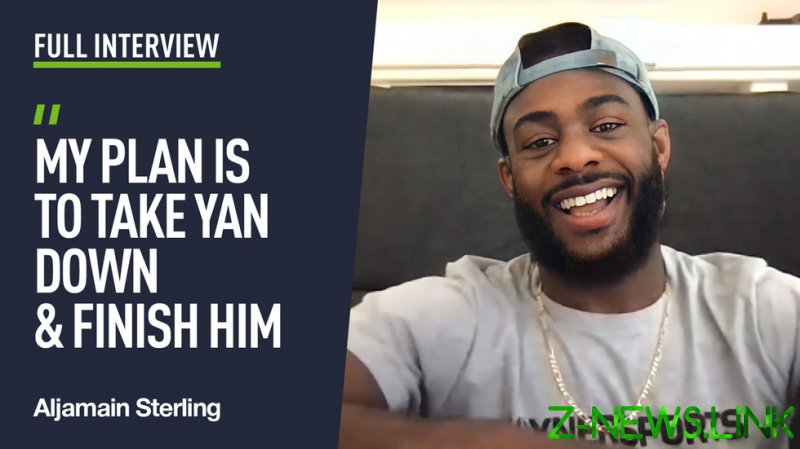 After a run of seven wins in his last eight, New York’s Sterling finally gets his opportunity at UFC gold in less than a week’s time where he will be tasked with quashing bantamweight champion Yan’s impressive winning streak, and realizing his own championship aspirations in the process.

Few could deny Sterling – a 14-fight UFC veteran – the opportunity but the man he faces inside the cage in Las Vegas next weekend appears to have all but dismissed the American’s chances.

Yan, whose sole career defeat came in 2016, has engaged in a social media back-and-forth with Sterling in which he has, among several other forecasts, predicted that he will finish the fight inside the distance.

As far as Yan is concerned though, these are just empty promises.

“I think he’s just trying to intimidate everybody,” Sterling told RT Sport of the man he faces at UFC 259. “I always find it weird when fighters try to intimidate fighters. We fight for a living, so you’re doing all those antics outside the cage, I don’t really get it. Unless you’re actually going to swing for the person, it becomes a whole different game, then it’s defend at all costs.”

As the well-worn cliche dictates, the time for talking is almost at an end and Sterling says that he is under no illusions as to the task which awaits him in the Nevada desert.

“He’s tough, he’s got serious skills, he hits hard, he’s a tough dude, he’s been around for a while now, he’s had a bunch of fights, he’s had some boxing fights,” Sterling said. “I’m just excited to get in there with him and see who the best guy is.

“I always have to find my place of intensity,” he says of his own approach to the fight. “I used to compete like that, just angry all the time. But now I compete more, it’s still intense, but not with the same amount of anger… it’s a little bit more controlled anger, more controlled chaos.

If there is one other fighter whose style could be similarly described, that might well be Khabib Nurmagomedov. The (still reigning) UFC lightweight champion is about as oppressive a grappler as mixed martial arts has ever seen and Sterling, whose own style is predicated on a similar foundation, says that Yan’s compatriot has been an inspiration to him.

“Oh yeah, I look up to Khabib,” he said. “Khabib’s a big inspiration to my style and helping me understand that, yeah, a fight can be on the feet, but when you’re good at something, stick to what you’re good at.

“I look at Khabib, and that style is relentless pressure, it’s really hard to stop a guy like that. Wrestling is a grinding mentality. If you don’t know how to deal with that grind, it can wear on you, it’s uncomfortable and it keeps you guessing and it dictates the pace of the fight and the tempo.

“If he’s not putting you away, eventually you’re going to grab that guy down. Especially if you’re a good grappler, like Khabib or myself. I pride myself on that.”

But whatever the method he employs to get there, Sterling says the destination will be the same – and it involves him lifting UFC gold aloft inside the Octagon late next Saturday night. While the irony of taking a leaf from Khabib’s book to help defeat the UFC’s other Russian champion would be significant, he plans on taking whichever route to victory presents itself first.

“I’m not looking to get any style points,” he explained. “I corner him, he throws something, leaves himself open, allows me to get inside for an attack, I drag him down, he defends it, that’s fine, drag him down again, get on his back and end the fight.”