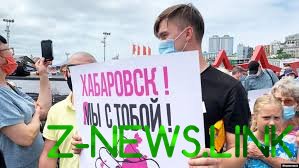 Commissioner for the rights of the child in Khabarovsk territory Victoria Tregubenko urged parents not to drive children on unauthorized rallies, which do not cease in the region for more than 20 days. According to the Ombudsman, rallies and marches are “psychological danger”.

“Participation in unsanctioned events a minor is treated by the law as improper performance of parental duties, involving children in activities not related to their age. From the point of view of psychology, introduction into the child’s psyche of dissent could in the future be a setback. Such effects can occur even years later. How low can distort the perception of life of the child. Children should not play in adult games,” said Victoria Tregubenko.

The Ombudsman added that in addition to the psychological dangers there is also the risk of infection with coronavirus: “According to the regional Ministry of health, since the beginning of the season with the coronavirus fell ill already more than 200 children. At the same time in June and July, the number of infections drastically increased to 89 cases”.

Add that to local newspaper DVHAB.RU reported that the residents of Khabarovsk began to receive an official warning from security officials on the inadmissibility of participation in unsanctioned protests.

Large-scale protests take place in Khabarovsk on a daily basis, starting from July 11. People are unhappy with the arrest of the former head of the region Sergey Furgala, who is suspected of murder 15 years ago. Vladimir Putin dismissed Furgala with the phrase “in connection with loss of trust”, appointed acting head of the region, his fellow party member Mikhail Degtyarev. However, the festival is also not much. The degree of discontent grew after Degtyarev said that the organization of the meetings involved some foreign nationals who are “rocking” the situation in the region.

Earlier for participation in the protests, the courts have fined MP from the Communist party Sergey Ilyin and the Secretary of the Khabarovsk branch of the libertarian party Artem Mozgov. Reports are filed on other activists.