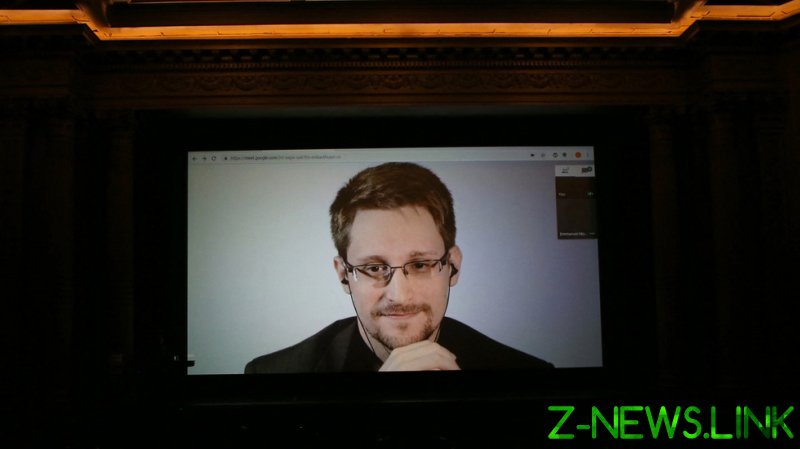 Snowden was booked as a keynote speaker at last Saturday’s get-rich-quick online conference hosted by the Canadian-based Private Investment Club (PIC), which promotes itself as “the largest elite real estate investment club in North America.” The group was founded by Sunil Tulsiani, who is described on PIC’s website as a former police detective turned-real estate investor, best-selling author, and business coach. He uses the handle ‘The Wealthy Cop’ on Twitter.

According to Vice Magazine, before Snowden joined, Tulsiani urged the Zoom audience to buy $47 tickets to a VIP session of the conference, waved around a $100 bill and asked people to “dance” for it, and said that Snowden’s story should inspire the attendees to “kill the virus” of “I can’t afford it.” At one point, another speaker reportedly walked onstage with a stack of bills and threw some of it into the air.

Tulsiani’s chat with Snowden began with a question about the accuracy of the former NSA contractor’s portrayal in a 2016 biopic directed by Oliver Stone.

After a few minutes of talking about whistleblowing, Snowden unexpectedly pulled up a headline image of Tulsiani in a 2017 CBC news story titled ‘Man named in $4.4M Ponzi scheme keynote speaker at Winnipeg event’. The story detailed how Canadian financial regulators previously cautioned investors against dealing with Tulsiani.

“As a whistleblower, it’s my obligation, both personally and professionally, to ask: Is this you?” Snowden said.

Snowden said the story about Tulsiani made him feel “very uncomfortable with this event,” and urged everyone to “really question, is this the kind of association that they want to have?”

“Are you going to be able to deliver on the promises that you’re making them?” he asked Tulsiani. “I hope to God that you will. But my advice to everyone on this call tonight, everyone looking at this, is [to] look up what you’re getting involved in. If you spend money, are you sure that you want to spend it?”

“Think hard if you want to take this, because for me, ladies and gentlemen, tonight – I don’t,” Snowden said and abruptly logged off.

A visibly baffled Tulsiani muttered, “Wow… wow…” and remained silent for a few moments. “This is totally unexpected, and I’m so sorry that this has happened,” he told the audience before taking a short break.

Tulsiani later returned and claimed that the “clickbait article” was misleading. “If I stole millions of dollars, I would not be here… I was never charged criminally… The article says ‘man named,’ not that he did it,” he said, as cited by Vice. He did not release a formal statement on PIC’s website or social media.

Once the news of the seminar broke, the Ontario Securities Commission (OSC) issued a warning to investors regarding its organizer. The regulator said that in 2012, Tulsiani was permanently banned from trading in Ontario, and in 2017, he pled guilty to violating Canada’s securities law by breaching the ban.

Tulsiani is also banned from selling securities in Manitoba, whose regulator warned the public in 2017 against participating in his investment scheme. Tulsiani denied any wrongdoing at the time and told reporters that he had no intention of breaking the law.