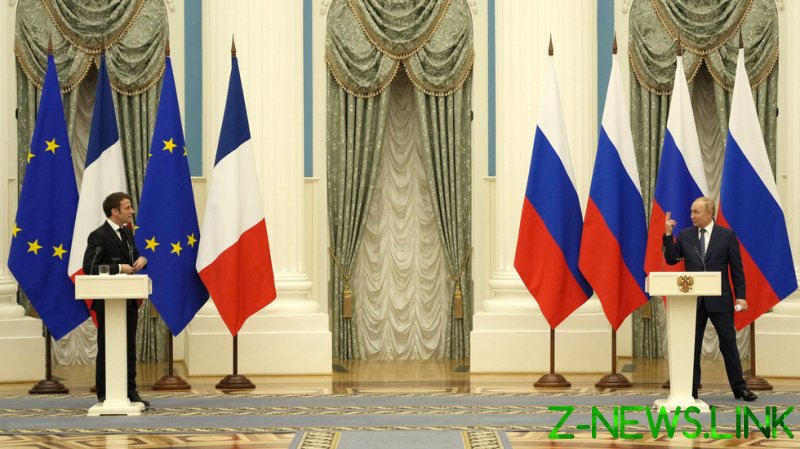 Russian President Vladimir Putin and his French colleague Emmanuel Macron met in Moscow on Monday, holding talks about the crisis in Ukraine, European security, and bilateral issues that lasted nearly six hours. They held a joint press conference afterward revealing some of the meeting’s results. The meeting comes amid soaring tensions over the issue of Ukraine, with Macron set to meet Ukranian leader Volodymyr Zelensky next.

There were three key points in the security proposals Moscow made public in December: no further NATO expansion, no deployment of strike systems along Russian borders, and pullback of current NATO deployments to the 1997 lines. NATO and US responses, sent over last week with a request to be kept private, did not address these points at all. “No yes or no, as if they were never asked,” Putin told reporters. “We only saw political cliches and proposals on various secondary issues.”

The French president said that dialogue with Russia “is the sole way of ensuring security and stability in Europe.” If the existing mechanisms and treaties are insufficient to resolve the security situation, he suggested new ones should be devised and put in place. Macron specifically noted that France and Russia “did not have the same understanding” of the meaning of documents such as the 1975 Helsinki Final Act – which established what would become the Organization for Security and Co-operation in Europe (OSCE) – especially when it came to the issues of human rights and territorial integrity of states.

The Russian president said it was “possible” to move forward on “a number” of proposals presented by his French colleague that might lead to the de-escalation of the situation in Ukraine. Neither Putin nor Macron revealed any details as to what these might consist of, with Putin saying he would discuss the matter with Macron further after the French president has had a chance to meet with the president of Ukraine on Tuesday.

Putin told reporters he had briefed Macron on Ukraine’s refusal to implement the Minsk agreements, even after Kiev has made commitments to do so in recent weeks at meetings in Paris and Berlin. Instead of taking steps to offer autonomy to the breakaway regions of Donetsk and Lugansk, Ukraine has chosen to persecute Russian-speakers within its borders instead, the Russian president pointed out. “As for the Minsk agreements, whether they are still viable or have any sort of perspective, I feel like there is simply no alternative to them,” Putin told reporters.

Bringing up NATO’s argument that any country is free to join the alliance if it so wishes, Putin said that Ukraine doing so would quickly result in a nuclear war with Russia. Kiev has designated Russia as an adversary and insists that Crimea belongs to Ukraine, something NATO countries agree with, Putin said. The peninsula voted overwhelmingly to rejoin Russia after the February 2014 coup in Kiev, backed by the US at the expense of a power-sharing deal mediated by France and Germany. Russia officially welcomed it back a month later – something it did not do with the two Donbass regions, which followed suit. Ukraine’s membership in NATO would trigger the alliance’s Article 5 mutual defense clause the moment Kiev decided to “reintegrate” Crimea by force, basically resulting in war with Russia, a leading nuclear power.