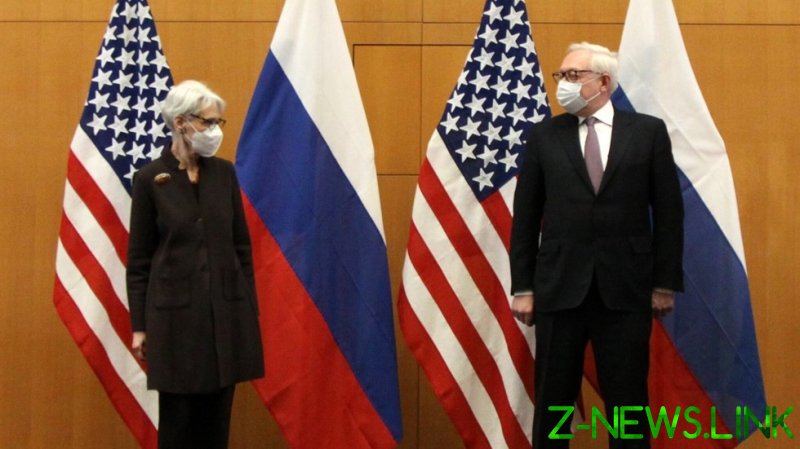 The US and Russia are no closer to resolving their strategic impasse after talks in Switzerland, with Washington refusing any limitations on NATO expansion and Moscow insisting the bloc must “never” include Ukraine and Georgia.

The encounter in Geneva between US Deputy Secretary of State Wendy Sherman and Russian Deputy Foreign Minister Sergey Ryabkov lasted for more than seven hours on Monday. Its main focus was a proposal Moscow sent to the US last month, and made public on December 17, insisting on curbing NATO’s further expansion and deployment of offensive weapons on Russian borders.

“For us, it’s absolutely mandatory to make sure that Ukraine never ever becomes a member of NATO,” Ryabkov told reporters on Monday. The same goes for the former Soviet republic of Georgia, he added. Moscow’s non-negotiable demand is that NATO change its 2008 platform that opened the door for membership to the two countries, the diplomat added.

The US is open to discussing the placement of its missiles in Europe and the size and scope of NATO military exercises on the continent, but any limits on NATO’s enlargement are a “non-starter,” Sherman told reporters in a separate press conference.

Washington “will not allow anyone to slam closed the door to NATO membership to anyone,” she said.

Instead, she focused on Ukraine, which the US has claimed is under threat of a Russian “invasion.” Sherman said Russia must withdraw troops allegedly amassed on Ukraine’s border in a “de-escalation” move, and listed financial and other sanctions the US is prepared to levy on Moscow if an invasion occurs.

Ryabkov told reporters he patiently explained to his colleague that there are no plans to “invade” Ukraine, and never have been. Russia is training its troops on its own sovereign territory and there is no basis for describing that as an “escalation,” he outlined. As for sanctions, he said the West has “lost the art of dealmaking” and been reduced to threats of sanctions and ultimatums. Russia, on the other hand, has simply laid its cards on the table and is willing to discuss things openly.

The Americans came prepared to listen to Russian proposals, but have failed to understand the gravity of the situation or the key issues that need to be resolved, Ryabkov said. Without legally binding assurances on NATO, nothing else matters, he explained.

As for Ukraine, it’s up to Kiev to abide by the terms of the Minsk Agreement and the UN resolution that endorsed it, and guarantee civil rights to Russian-speaking citizens in disputed eastern regions, Ryabkov added.

There is still a chance the two sides could reach an agreement. Ryabkov and Sherman will meet again on Wednesday in an expanded format involving NATO representatives, and again on Thursday within the Organization for Security and Cooperation in Europe (OSCE) on January 13.