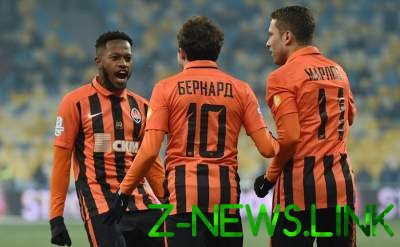 The leaders of the Donetsk “Shakhtar” attracted the attention of many foreign top teams.

The interest of the giants to the players of “Shakhtar” in comments to the TV channel “Football 1” said the General Director of “miners” Sergei Palkin. In Europe in a special account ismaily defender, Central midfielder Fred and the left winger Bernard.

“Even today I had a meeting with certain European agents, who are interested in Fred, ismaily and many other players. This interest will grow based on how we are going to show themselves on the field.

What interested Bernard, Fred and other players — that’s OK, because the boys showed good football, especially in Europe,” said Palkin.

Portal “Transfermarket” the most expensive footballer of Shakhtar believes Bernard ($14 million). Interest in the midfielder of the national team of Brazil are showing Liverpool, Chelsea and Arsenal.

As for Fred, the Brazilian got on the radar for scouts “Manchester United”. The current contract of the player with FC Shakhtar expires in four years.

Shakhtar in the last few years was sent to the top clubs a solid number of players – Douglas Costa went on to conquer Bayern, Henrikh Mkhitaryan shone in the Borussia D, Luiz Adriano lit up in Milan, and Fernandinho has built a decent career in “Manchester city”.