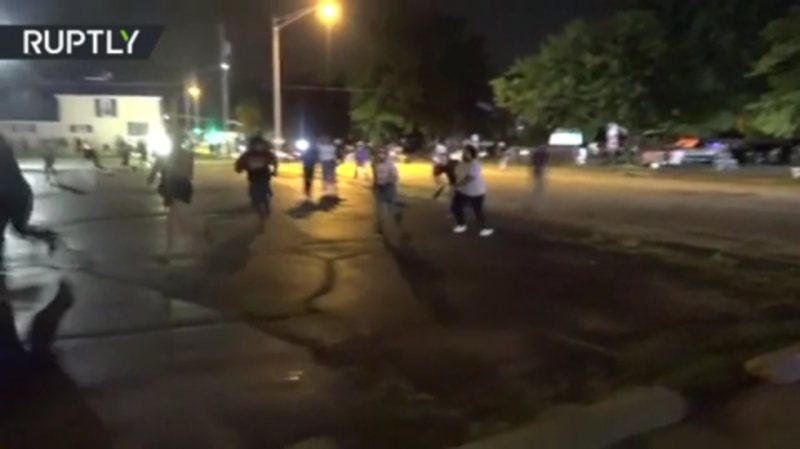 Kenosha saw its third consecutive night of disorder on Tuesday, sparked after the police shooting of 29-year-old Jacob Blake, a black man, during a domestic ordeal over the weekend. Protests hours after the incident soon boiled into riots, seeing looters ransack countless businesses on Monday, while arsonists ignited some 37 fires.

The chaos in the city has yet to reach the levels seen the night prior, with armed citizens taking up positions around the city, including on rooftops, to protect local businesses.

A number of protesters also appeared to be armed in videos that made the rounds online. One livestream captured a shooting in which a young man was said to have been hit in the chest. He was seen being loaded into a car which soon fled the scene, but his current status, and the extent of his injuries, remain unclear. A second person was also reportedly hit in the incident, but it is unknown whether either were affiliated with the protests or merely bystanders.

Protesters have ignited several small fires, though in some cases other demonstrators were seen extinguishing them. In contrast to previous nights, no major acts of arson were reported, however.

While looting and arson appeared less widespread, clashes again erupted between protesters and police on Tuesday, seeing activists hurl fireworks, bricks and other projectiles at officers, who responded with copious tear gas.

A major courthouse in Kenosha was the scene of many of the clashes, where police have maintained a heavier presence than elsewhere in the city, erecting a barricade around the building.

National Guard troops have also been deployed to the courthouse for a second night, after Wisconsin Governor Tony Evers signed an executive order doubling the Guard’s presence in the city from 125 to 250 personnel and declaring a state of emergency amid the continued riots. According to Trump communications advisor Ben Williamson, local law enforcement had requested a force of 750 Guardsmen, and White House Chief of Staff Mark Meadows offered Evers 500 additional troops, but the governor reportedly refused. Evers has yet to address the allegation.