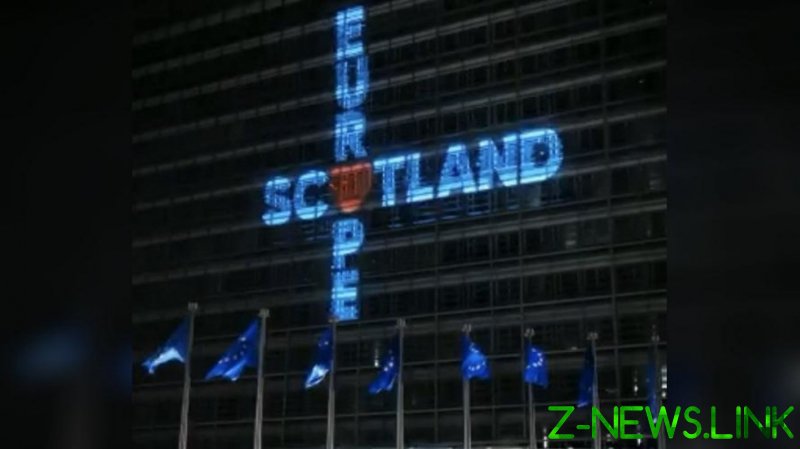 “Scotland will be back soon, Europe. Keep the light on,” Sturgeon said as clocks struck midnight in Brussels and the UK’s exit from the European Union became official on Friday.

The United Kingdom’s divorce from the continental block after 45 years of membership was the result of a protracted process following the 2016 referendum, which the Tory government expected would fail. Instead, a narrow majority in England and Wales backed Brexit while Scotland overwhelmingly voted to remain – by 62 percent to 38 percent.

Sturgeon came to lead the Scottish National Party (SNP) after the failure of the first Scottish independence referendum in 2014. Only 45 percent of Scots voted to leave the UK, with 55 percent choosing to remain, in part due to warnings from Brussels that an independent Scotland would not automatically become an EU member and would have to negotiate entry from scratch.

That ratio has now been reversed, according to recent polls. Research from Ipsos MORI in October said that support for Scottish independence was at 58 percent, an all-time high. Other polls show support for secession at anywhere between 51 and 59 percent.

UK Prime Minister Boris Johnson’s handling of the Covid-19 pandemic and the complicated Brexit negotiations have both been blamed for the growth of separatist sentiments in Scotland. Whatever may be the case, Sturgeon was quick to embrace the cause and told the BBC in November she favored a new referendum as soon as the next Holyrood is elected in May. The SNP is a favorite to win the election.

“Who do we want to be in the driving seat of shaping Scotland’s future?” Sturgeon said at the SNP annual conference in mid-December. “The Scottish government has not got everything right, far from it. But I doubt there are many people in Scotland who would have wanted Westminster to be more in charge of our pandemic response.”

She added that she’d “never been so certain” that Scotland would become an independent nation.

Johnson has said the 2014 referendum was a generational event and its outcome should be respected. Scotland and England have been under the same crown since 1603 and in a formal state union since the Kingdom of Great Britain was established in 1707.