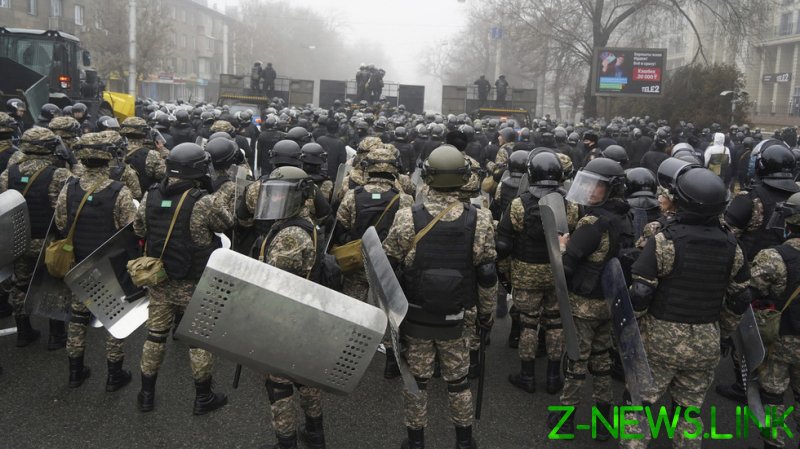 At least 18 police officers and military servicemen were killed in clashes in Kazakhstan, amid what the authorities are calling a “counter-terrorist” operation. No details on civilian casualties have officially been revealed.

The updated figure was revealed by Kazakstan’s interior ministry late on Thursday. Nearly 750 law enforcement have received various injuries in the ongoing unrest, the ministry said.

Only figures related to police and military casualties were made public, with no official information on killed or injured protesters, rioters, or what the Kazakh authorities are calling “terrorist gangs” available.

However, security officials had earlier described “dozens of attackers” having been eliminated in two separate attacks on the police HQ in the city of Almaty. Known as “the southern capital” in Kazakhstan, the country’s largest metropolis has become a hotspot of protests, which then escalated into rioting, arson and looting of administrative buildings, businesses and shopping centers.

A UN official on Thursday alleged that as many as 1,000 people have been wounded during the unrest. “Almost 1,000 people have reportedly been injured in the protests” the UN Office of the High Commissioner for Human Rights (OHCHR) said in a statement on Thursday, which urged all the parties in Kazakhstan to “refrain from violence and to seek a peaceful resolution of grievances.” The OHCHR did not elaborate on their sources for the number cited.

Almaty authorities responded with a massive police operation on Thursday, and heavy gunfire was heard in the central Republic Square, where hundreds of protesters had previously gathered and where groups of rioters on Wednesday broke into the city administration building, setting it on fire. Law enforcement said they managed to secure the area, with the operation ongoing in other parts of Almaty.

The interior ministry said late on Thursday it continues to search for rioters, detaining lawbreakers across the country. Those who put up “armed resistance” to the police and the military, will be “eliminated,” it warned.