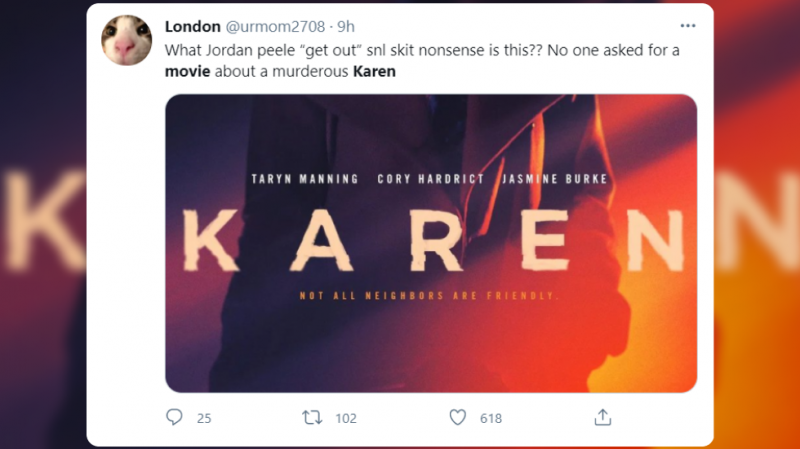 ‘Karen’, directed by Coke Daniels, stars Taryn Manning as the titular ‘Karen’ who terrorizes an African-American family – played by Cory Hardrict and Jasmine Burke – that moves into the neighborhood.

The trailer, which was released last week but gained traction on Tuesday, shows ‘Karen’ installing extra security in her home after the black family moves in across the street, as well as complaining to them about leaving their trash can on the curb. During another scene in the trailer, Karen awkwardly remarks that the black woman is “slaving away in the kitchen,” and in another scene, Karen appears to call 911 on a group of black teenagers who are then harassed by the police.

“She doesn’t like black people,” says a young girl about Karen later in the trailer, before another character finds a Confederate flag soap dispenser in the villain’s house.

The trailer concludes with Karen saying, “Bad things happen to people that don’t comply” – an unsubtle reference to people who argue that black people shot by the police should have complied with the officer’s orders.

Though the movie appears to be aimed at a liberal and African-American audience, many social media users protested about the trailer online and accused the film of exploiting “black trauma.”

The bulk of the criticism compared the movie to the work of Jordan Peele, who directed 2017’s ‘Get Out’ – a horror movie about a killer white family targeting black people, which spawned a wave of copycat films in the genre that also attempted to tackle the theme of racism.

“Everyone’s been doing their best Jordan Peele impression and I absolutely hate it,” complained one woman, who argued that “the magic of Get Out was that it wasn’t so on the nose like this.”

Another woman commented that although ‘Get Out’ “was interesting for the time being,” we “really don’t need ‘black folks being terrorized by racist whites’ to become a horror sub genre…”

Others expressed their shock that the movie wasn’t a parody and even Chance the Rapper weighed in on the trailer, jokingly responding, “Well it’s about time they made a movie about racism.”

Use of the racial slur ‘Karen’ blew up in 2020 following a series of highly publicized incidents involving white women calling the police on black people during disputes. In one of the biggest incidents, a woman walking her dog in New York City’s Central Park had her face and name plastered in the news after she called the police on a black birdwatcher after he told her to put her dog on a leash.

‘Karen’ is used as a slur as it is considered to be the most typical name for a middle-aged white woman, similar to other racial slurs involving stereotypical names, such as ‘Shaniqua’ for black women, ‘Dago’ for Italians, and ‘Mick’ for the Irish.

The movie ‘Karen’ does not yet have a release date.