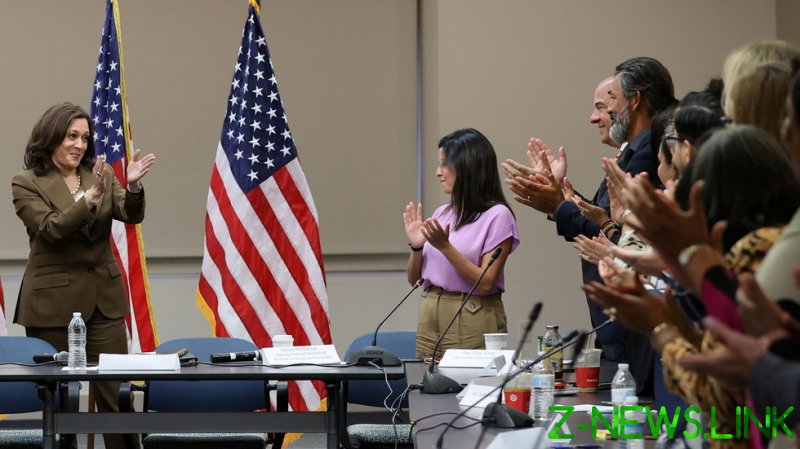 Harris’ spokesperson Symone Sanders confirmed in a statement over the weekend that Harris met with members of the Texas state legislature this week after they ‘fled’ to Washington, DC to avoid voting on an elections integrity bill in their home state. Three have since tested positive for Covid-19 and will need to quarantine for 10 days. Images of Harris speaking with the Democrats in an indoor setting showed no one appeared to be wearing masks.

Sanders said the vice president did not have “close contact” with the Democrats and only met with two of the three infected.

“Based on the timeline of these positive tests, it was determined the Vice President and her staff present at the meeting were not at risk of exposure because they were not in close contact with those who tested positive and therefore do not need to be tested or quarantined. The Vice President and her staff are fully vaccinated,” Sanders said. All three Democrats who tested positive for Covid-19 were previously vaccinated as well.

The Texas Democrats met with numerous other politicians while in DC, including Sen. Chuck Schumer (D-New York), though the Democrat leader said he was not in contact with anyone who was infected.

Harris met with the group on Tuesday. The first positive test came Friday evening and the following two on Saturday. The Texas politicians were heavily mocked on social media following the positive tests, as critics spread images of the politicians making their trek while none appeared to be masking.

The Centers for Disease Control and Prevention (CDC) states that vaccinated individuals do not need to quarantine after being in contact with someone who is Covid positive, but they do recommend monitoring symptoms for two weeks.

Harris has been traveling the country promoting Covid-19 vaccinations. One of the cities she recently visited, Las Vegas, has already gone back to requiring masks for people in indoor settings, with health officials citing recent upticks in cases as the reason. California health officials have put forth the same guidance in Los Angeles.

There have been multiple high-profile cases of people who are vaccinated getting infected with Covid-19. A Foo Fighters concert that had been scheduled for this week required attendees to be vaccinated, but it was ultimately canceled after someone within the “organization” tested positive.

Similar to Harris’ situation, United Kingdom Prime Minister Boris Johnson, together with Chancellor of the Exchequer Rishi Sunak, recently came into contact with Health Secretary Sajid Javid, who tested positive for Covid-19. They were not initially planning to self-isolate since they were participating in a ‘daily contact testing pilot’ which would allow them to continue essential government business even after the risky contact.

However, following a backlash, both the prime minister and the chancellor decided to self-isolate, with Sunak admitting that “the sense that the rules aren’t the same for everyone is wrong.”