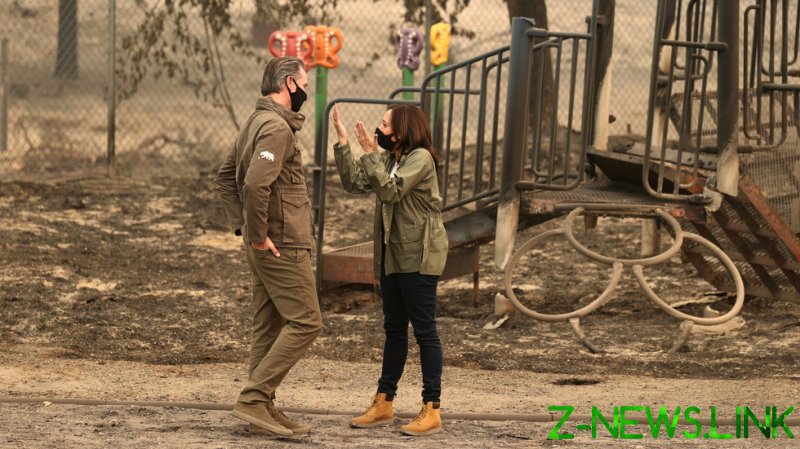 “Kamala Harris may have made Timberland boots cool again,” gushed a Yahoo! News headline, one of several touting the VP pick’s footwear as she alighted from a plane to visit firefighters and those displaced by the devastating wildfires in Fresno, California.

Called “Timbs” for short, the boots were ubiquitous during the 1990s and early 2000s, worn by men and women and especially popular in hip-hop culture. Even BET – short for Black Entertainment Television – got on board Harris’ nostalgia trip, urging its Twitter followers to “register to vote” accompanied by a clip of Harris deplaning in what it insisted were “wheat Timbs.”

While they are no longer as popular as in the era when rap producers were naming themselves after them, the boots are still sported by celebrities, and upscale crystal-encrusted versions are retailing for $5,500 (recession? what recession?!)

But it was Harris’ “practicality” that had supporters swooning on social media – no crystals for her. Harris fans tweeted a GIF of their heroine strolling off the plane, hailing “the Timbs” as the second coming of footwear.

An inordinate number of those enraptured by Harris’ “Timbs” seemed to hail from the Biden campaign or the candidate’s own family, however.

Not everyone was taken in by the ‘relatable’ footwear – and many of the would-be VP’s detractors hailed from the political Left.

Some snickered at the style, pointing out that if Harris was trying to pander, she’d missed the mark with the “wrong” Timbs.

Wearing the attention-getting shoes to visit wildfire victims might also not have been the best choice, given that Harris, the former Attorney General of California, was skewered for keeping inmates locked up in the state’s overcrowded prisons after the Supreme Court had ordered they be paroled, in order to fight wildfires on the cheap. While she later blamed the ‘oversight’ on her subordinates, it resurfaced during the 2020 presidential debates, helping to tank her chances for the nomination.

While turning candidates into style icons might raise a few eyebrows, it worked for Massachusetts Senator Ed Markey, who became the first politician to survive a challenge from a Kennedy in the history of the state when he beat out Joe Kennedy III to hold onto his seat earlier this month. The Sunrise Movement, the power behind the Green New Deal (which Markey co-sponsored in the Senate), threw their considerable resources into keeping him in office, turning the career politician into a hip millennial fave – a strategy some have hinted they might try with Biden.

But the Timberland video wasn’t Harris’ first use of the airplane stairs as a fashion runway – she posted a clip on Instagram last month of herself disembarking in Milwaukee, feet sheathed in practical-nostalgic Converse Chuck Taylors.