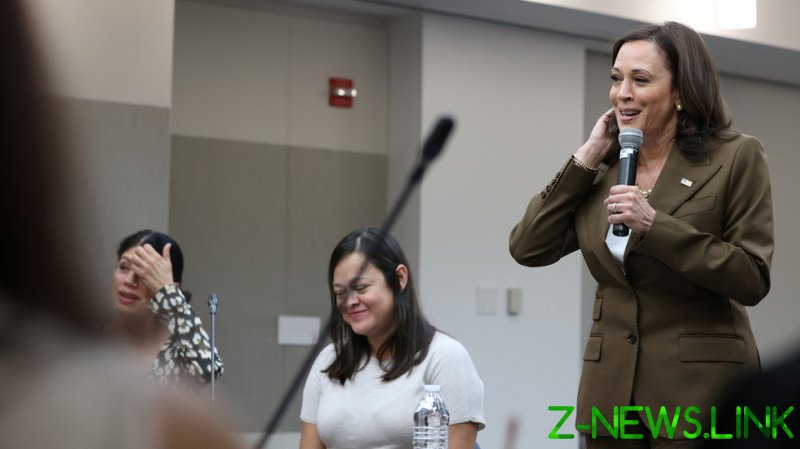 “Defending the right of the American people to vote is as American as apple pie,” Harris told the Democrat legislators on Tuesday, a day after 51 of them flew to Washington on private jets to prevent the Texas House from having the quorum necessary to vote on bills.

Harris praised the politicians for their “courageous stand” and “patriotism,” saying that they made great sacrifices to protect voting rights. She said she wanted to put their efforts in historical context, noting pivotal historical incidents that helped advance voting rights, including an 1867 appeal to Congress by abolitionist Frederick Douglass, arguing that black men should be allowed to vote, and the 1913 suffragette march down Washington’s Pennsylvania Avenue.

“And 2021, the Texas Legislature came to Washington, DC,” Harris said. While speaking on Monday at an event in Michigan, she said the Texans were “marching in the path that so many others before did, when they fought and many died for our right to vote.”

The vice president’s latest comments came hours after Texas Governor Greg Abbott vowed to arrest the absconding lawmakers upon their return to the state and Texas House Republicans voted to approve warrants to round up their Democrat colleagues by force, if necessary.

Texas is one of several Republican-controlled states in which lawmakers have introduced or passed bills to shore up election security in the aftermath of the 2020 vote, when former President Donald Trump alleged that he lost because of massive fraud.

President Joe Biden and other Democrat politicians have framed the state bills as an attempt to keep non-white people from voting. “We’re facing the most significant test of our democracy since the Civil War,” Biden said on Tuesday. “That’s not hyperbole – since the Civil War.” He called the state legislation “an unfolding assault” and “an attempt to suppress and subvert the right to vote.”

It’s not altogether clear how the Texas legislation would stop black people or anyone else from voting. The House bill’s major provisions include identification requirements for voting by mail, increased access for poll watchers to observe the counting of votes, and bans on extended hours and drive-through service for early voting. It also would prohibit sending of vote-by-mail applications to people who haven’t requested them.

A Senate version of the bill, which has largely the same provisions, was passed on Tuesday in a party-line vote. But neither that bill nor the House version can become law if the House can’t gather a quorum before a special legislative session ends next month. Abbott has said he will call more special sessions until votes are held. Two-thirds of the 150-member House must be present, and Republicans hold an 83-67 majority.

Social media users pointed out the irony of many Democrats calling for the elimination of the Senate filibuster rule, which allows the minority Republican caucus to stall partisan bills, while praising the Texas Democrats for keeping their state House from voting on legislation.

“Let’s see now, Democrats denying a quorum in Texas to prevent legislation they cannot defeat is good,” author Richard Paolinelli said. “GOP denying debate on a bill they cannot defeat by using the filibuster is bad. If you agree with both of the above statements, you might be a hypocrite.”