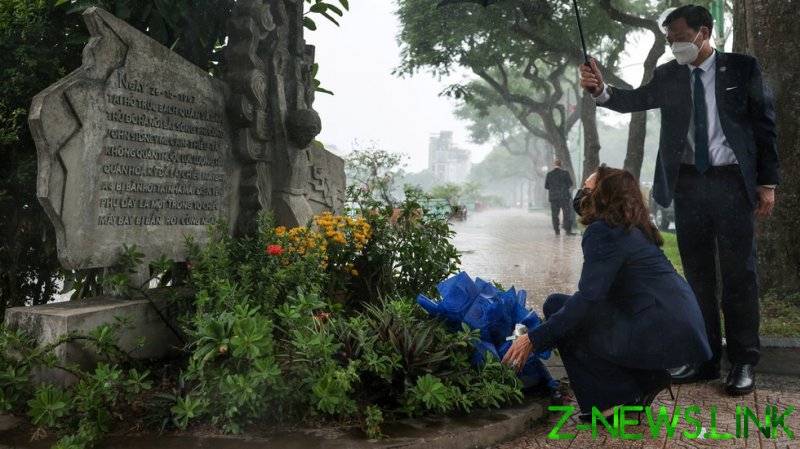 US Vice President Kamala Harris concluded her two-day trip to Hanoi, which was aimed at shoring up opposition to China, by visiting a memorial to McCain, who was on his way to bomb a nearby factory in 1967 when his plane was shot down by North Vietnamese fighters.

McCain was famously captured on landing, and subjected to years of imprisonment and torture. His ordeal became a key component in his transformation into a heroic figure which complemented his rigorously neoconservative approach towards foreign affairs in his subsequent political career.

Harris wrote on Twitter that “We honor his sacrifice in Vietnam” – despite the previous day, claiming that “The United States and Vietnam have overcome a difficult past to become trusted partners” and that America supports the sovereignty of Vietnam. But is the US really apologetic over the legacy of this war? Absolutely not.

Kamala’s tribute to McCain, who died three years ago, is a veiled reflection that the US is not, in fact, truly sorry for its destructive and violent war in Vietnam, where hundreds of thousands of people died at the hands of American bombing and napalm attacks. Indeed, it’s debatable if it is ever sorry for any of its actions, anywhere. It’s very telling, for example, that such a comment was made amid the background of the ongoing catastrophe in Afghanistan. The life and legacy of McCain brings up an interesting debate over which wars are just, and what exactly constitutes a ‘patriot’?

McCain has become something of a cult figure in Washington. Given his imprisonment in Vietnam and hawkish foreign policy legacy, he is heralded on a bipartisan scale as a national hero, a patriot and – as Harris’ tribute shows – used as an icon in support of American militarism around the world, including in Vietnam. Accordingly, there is little emphasis on the aggression waged by the US, and the narrative focuses on the heroic, honourable soldier. It goes without saying that McCain supported every modern war the US was engaged in, and advocated many more.

But is this really patriotism? If so, how? And what does it tell us about the US establishment? A patriot in its rawest definition ought to be considered as someone who loves his country and rallies to defend its values at a time of peril.

The image of soldiers who suffer, sacrifice themselves and die in order to defend their countries is a representation of national sovereignty and glorified the world over. This attitude of remembrance and appreciation of veterans is the same in Washington as it is in Beijing, Moscow, Hanoi, Pyongyang and so on. And of course, there are many conflicts involving America where the participants might rightfully be described and remembered as true patriots, such as those who fought for the Union in the Civil War, and the Second World War.

But the glorification of McCain’s legacy and by extension, what happened in Vietnam, is creating and enabling an all-embracing thirst for an imperial war machine, which is something entirely different. In conflating it, there is an element of deception involved.

And here is the problem with the US and its allies – there is nothing wrong with a national respect for the sacrifice and struggle of soldiers. But for too long, this has been extended into advocating support for wars which were not patriotic and were inherently unjustifiable.

Let us not forget those who opposed the war in Vietnam and refused to serve were legally persecuted as draft dodgers and depicted as a national disgrace. Whilst this does not, perhaps, taint the struggles of those who did participate – and there is no denying McCain’s experience was personally horrific – it nonetheless dismisses the suffering which the conflict imposed on the Vietnamese population, as if the brutality they were subjected to by the invading force didn’t actually matter.

This reveals a two-tier level of priority and privilege. Regardless of the soldiers whose lives were lost – and they cannot be blamed for US aggression – it is nonetheless just outright wrong to honour the Vietnam War, the Iraq War, or any other conflicts that were promulgated in the name of American hegemony. There was no ‘honour’ involved in any of these.

Optionally selected wars of aggression are not a fight for national freedom. They needlessly inflict pain, suffering and death upon others. Harris refers to the “sacrifice” of American lives, but not the Vietnamese who died mercilessly amid the destruction unleashed on their nation in the name of anti-communist paranoia.

Harris’ stunt illustrates the lack of remorse for what was one of the most horrific wars of the 20th century, in favour of a narrative which – through the symbolic medium of John McCain – stands to glorify America’s actions. This is a stark irony when attempting to superficially befriend Vietnam, and reveals a staggering lack of empathy (and the true purposes of the visit).

It doesn’t seem to register to Harris that the memorial she visited was commemorating someone who was involved in carpet bombing the country. What is America’s honourable sacrifice is otherwise the death of innocent people. It is this failure to adequately understand Vietnam, and inability to make more than token gestures, that illustrates perfectly why the relationship will never get too close.