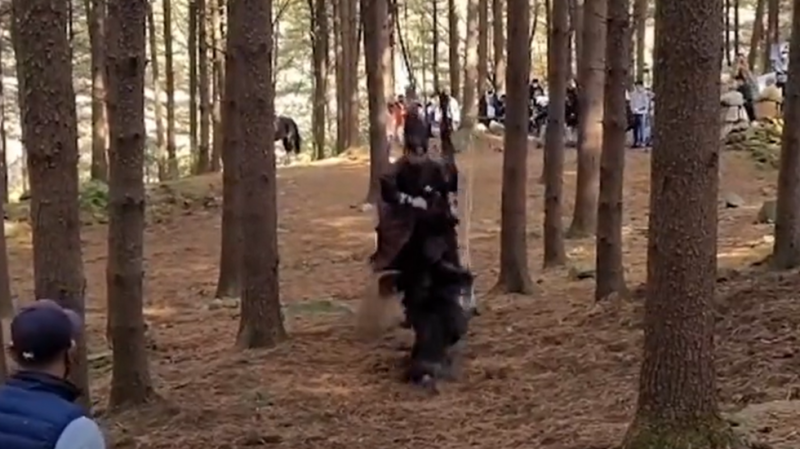 Thousands of petitioners are demanding new animal welfare protocols, after footage surfaced showing a horse being made to tumble head-first onto the ground during the filming of a popular South Korean historical drama.

KBS TV has issued an apology for the incident on the set of its highly rated series ‘The King of Tears, Lee Bang-won’, which it described as an accident. “During filming, the actor fell far from the horse and the horse’s upper body hit the ground hard,” the broadcaster said.

However, the video clip, which was released by the Korean Animal Welfare Association (KAWA) on Wednesday, shows the horse being made to run at full speed with a stuntman on its back and a rope tied to one of its back legs. The animal went down head-first and tumbled onto its back with a loud thud. As KBS TV acknowledged in its statement, “About a week after filming, we found out that the horse died.”

The network canceled two episodes of the drama that were scheduled to air this week, but public backlash over the incident continues. A petition on South Korea’s presidential website has gathered more than 105,000 signatures, calling for new rules to prevent animal cruelty on television and movie sets. As it noted, crew members ran to check on the condition of the stunt actor after the fall, but the horse was ignored as it lay motionless on the ground.

Another petition, signed by more than 40,000 people, calls for the series to be taken off the air as punishment. KAWA has reportedly filed a lawsuit against the broadcaster for allegedly having violated animal protection law.

South Korean actors joined in the calling out of the cruel treatment of animals on set. “I hope animal abuse disappears,” Bae Da-hae said. “Please sign the petition so that the fundamental problems of animal cruelty in the media can be resolved through this incident.”

READ MORE: The rise of South Korean culture: From the US military to Squid Game & K-Pop (E1096)

KBS TV is one of the leading producers of so-called K-dramas, which have been popularized across much of Asia and the Americas via their airing on international networks.