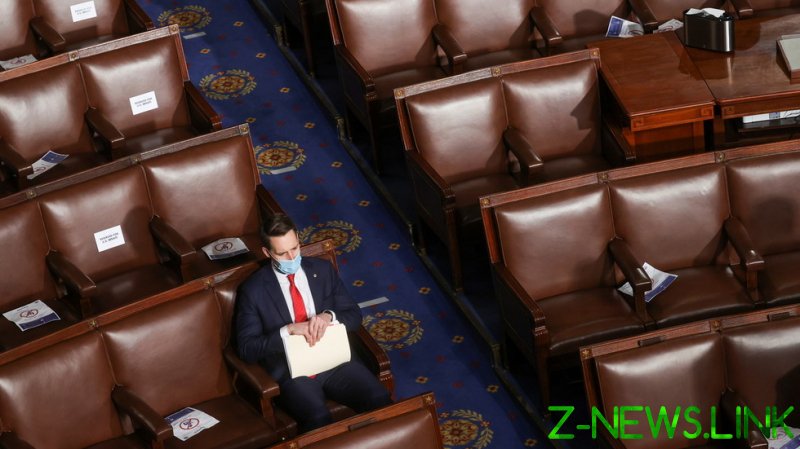 Simon & Schuster announced on Thursday that it would not publish Hawley’s forthcoming book, ‘The Tyranny of Big Tech’, claiming that his objections over the November presidential contest played a role in the “disturbing, deadly insurrection” that occurred on Wednesday at the US Capitol.

The Missouri lawmaker, who echoed US President Donald Trump’s allegations that the election was marred by widespread voting irregularities, said the company’s decision was “Orwellian” and that he was being punished for representing his constituents. He vowed to “fight this cancel culture,” describing the situation as a “direct assault on the First Amendment.”

The US senator wasn’t alone in denouncing the move. Abigail Shrier, an author whose own book, ‘Irreversible Damage: The Transgender Craze Seducing Our Daughters’, became the target of certain kinds of censorship due to its allegedly “transphobic” views, warned that Hawley’s treatment could signal a slippery slope that leads to corporate control over what is deemed ‘acceptable’ speech.

Many argued that Shrier’s fears were already a reality, pointing to policies enacted by companies such as Visa and Airbnb, which have declined to do business with “hate groups” or individuals flagged for their unsavory views. Airbnb said that it canceled some reservations made by members of the Proud Boys, a right-wing group, who came to Washington DC to participate in the protest against certifying the 2020 election results.

One Twitter user described the practice of denying services or business to people based on political speech as “oligarchic totalitarianism,” while another commenter said it was “clear” that what happened to Hawley was just the beginning.

“You may not be the hated person right now [but that] doesn’t mean you eventually won’t be on the same lists,” warned one reply.

The outrage wasn’t universal, however.

“These are all private companies that can refuse service for any reason,”insisted one Twitter observer.

Companies already have “standards” and can deny services to people based on a range of criteria, another critical response argued.

Shrier herself is no stranger to corporate control over free expression and debate. Her book was briefly pulled from shelves by retail giant Target, apparently over a single complaint on Twitter. The company later reversed course, insisting that it was committed to offering a “broad assortment” of books for its customers. The incident was viewed by many as an example of corporate pandering that badly backfired.