Home / WORLD / Just as with Brexit, there’s apparently a ‘right’ and ‘wrong’ stance on vaccines, & people who don’t get jabbed are being shunned

Just as with Brexit, there’s apparently a ‘right’ and ‘wrong’ stance on vaccines, & people who don’t get jabbed are being shunned 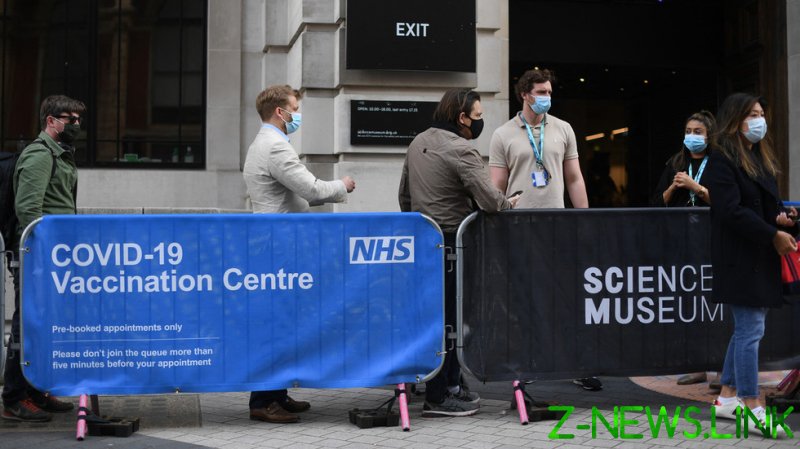 Have your friends had the Covid-19 vaccine yet? And if not, should you still be mates?

Incredibly, this seems to be a question some are now asking. Earlier this week, ITV’s Good Morning Britain show kicked off the debate by asking whether it was right to stop being pals with people who refused the vaccine. ‘Countdown’ presenter Nick Hewer and host Adil Ray both admitted they would dump refusenik friends.

Rather than being horrified at the thought of sacrificing a friendship on such trivial grounds, others have since joined in with the disowning. One Telegraph commentator described her reaction to discovering a friend would not be lining up for the jab: “I found myself fuming. I feel increasingly angry at those who refuse to be vaxxed,” before concluding, “When I next throw a dinner party, if you’ve not been jabbed, you’re not coming in.” Personally, I’d sooner eat directly from a bin than attend a ‘proof of jab required’ dinner party. But perhaps that’s just me.

What’s wrong with these people? First off, for all their supposedly superior scientific knowledge, they clearly don’t know how vaccination works. The vaccines currently available have surpassed all expectations in their capacity to protect against serious illness and they are proving, so far, to be effective against the full complement of coronavirus variants. What this means is that if you’re vaccinated, you stand very little risk of becoming seriously ill and – even better – this holds true no matter where you go, what you do or who you mix with. Put simply, the jab has no idea who your friends are; it does not suddenly become less effective because you mix with someone with wacky ideas.

For some, anger is directed at vaccine-refusers because the government likes to hold this miniscule proportion of the population responsible for continued restrictions on all of our lives. Since January, we have been told that lifting lockdown is tied to the number of people vaccinated. But what exactly that magical number is, keeps changing. At the start of the year, we were told we could ‘cry freedom’ when the most vulnerable were vaccinated. Since then, the goalposts have shifted. And kept on shifting. Now, with over 39 million – 75% of the adult population – having received a first vaccine dose, it seems we can’t drop social distancing until everyone is vaccinated, including teenagers and children for whom the virus poses very little risk.

We need to be honest. With so many people now vaccinated, and the link between cases and hospitalisations and deaths now thankfully broken, keeping restrictions in place is a political – not epidemiological – decision. We continue with rituals like mask wearing and social distancing for no other reason than the government and its team of behavioural scientists tell us we must. Yet rather than acknowledging this, Prime Minister Boris Johnson and Health Secretary Matt Hancock prefer to point the finger at the unvaccinated.

Publicly declaring your intention to unfriend vaccine refuseniks tells the world that you are a good person who follows the rules – unlike all those Covidiots. It is an act of virtue signalling designed to say more about you than your friends. Once, posh people looked down on the great unwashed, now the morally superior people look down on the unvaccinated.

Unfriending is a nasty way of personalising what should be a private medical decision. But it is entirely in keeping with the way so many commentators have responded to the pandemic. Last spring, it became legitimate for people in large houses with big gardens to express contempt for those who sought a few moments of respite from lockdown by sitting on a park bench. Nurses filmed themselves crying at the sight of people relaxing in the sun. People who joined with neighbours for VE Day street parties, queued up outside Primark, or spent a sunny day at the beach were branded Covidiots.

Now, vaccines are getting the personal treatment. The NHS started it. Get vaccinated and you’ll most likely be presented with a sticker like a five-year-old who behaves well for the dentist. Social media companies quickly followed suit with virtual badges that can be pinned to profile pictures. The point seems to be to make visible those who have been jabbed and utilise peer pressure to normalise vaccine uptake.

Perhaps this manipulation was well-intentioned. But the consequence is that vaccines now risk becoming embroiled in a culture war. Just like with Brexit, we seem to have arrived at a position where there is a ‘right’ and a ‘wrong’ view to hold on vaccines. Those who hold the wrong, ‘bad’, view deserve moral condemnation. Rather than remaining friends and discussing differences of opinion, we must throw out heretics and dissenters. Sadly, people seem proud of their partisanship, but all it tells me is that they are closed-minded.

Unfriending people who oppose vaccines, just like yelling “Covidiots” at people sitting on park benches, is a really unhelpful way of dealing with a virus. With greater sympathy and understanding, as well as more openness to discussing different approaches to dealing with the pandemic, we may have fared better – not just at dealing with coronavirus, but with education, mental health, and the long-term social, medical and economic disruption to come. I, for one, am more than happy to say good riddance to friends who only like me because of my vaccine status.