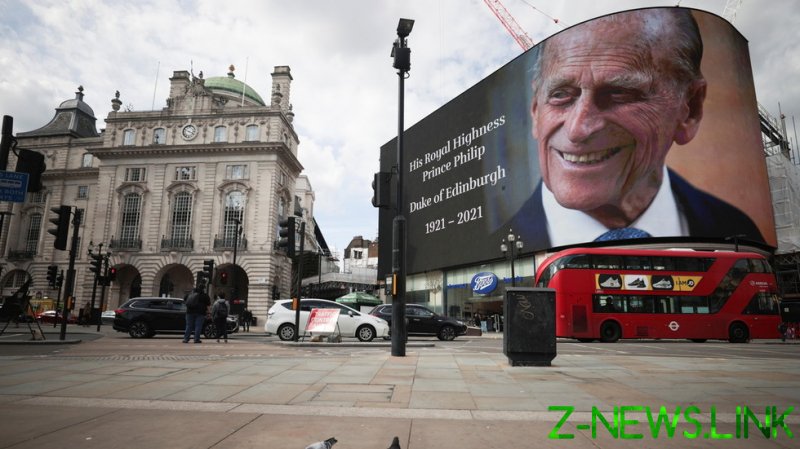 FULL DISCLOSURE: I used to know HRH Prince Philip, Duke of Edinburgh. I say, I used to know. What I actually mean is that I met him once, many years ago. Well, ‘met’ isn’t strictly true, either. However, when it comes to choosing sides in Britain’s favourite bloodless civil war, whether you’re a whinging roundhead or a lick-spittle cavalier, we Brits never let the truth get in the way of a good story, as the nation’s eight days of official moaning, sorry, mourning, clearly demonstrate.

From fawning eulogies to near-treasonable hate speech, and cry-baby TV presenters to weekend wannabe revolutionaries, there’s nothing like a royal death in the family to bring out the worst in a country cretinized by binary brouhaha. Everyone and their aunt has an opinion about the man I and other privileged insiders affectionately knew simply as ‘Phil the Greek’.

I first, and admittedly last, encountered the Duke back in 2003, while giving a speech in his presence at the Mansion House, London. Flanked by the then Bishop of London, Richard Chartres and two vice-chancellors, Prince Philip was being awarded an honorary doctorate following the merging of my alma mater, the University of North London, with London Guildhall University. The occasion also saw him anointed as patron of this newly minted ‘London Metropolitan University’ (LMU) – a position his son, Prince Andrew, Duke of York, would go on to take up a decade later, following 60 years of patronage by the Duke of Edinburgh. Both dukes were part of a line of royal patronagethat started with Prince Albert in the 1850s, with his support for the ‘Metropolitan Evening Classes for Young Men’ – a forerunner to the current, and still proletariat, university. At the time of Prince Andrew’s patronage, LMU noted his “strong interest in supporting young people”. Hmm. 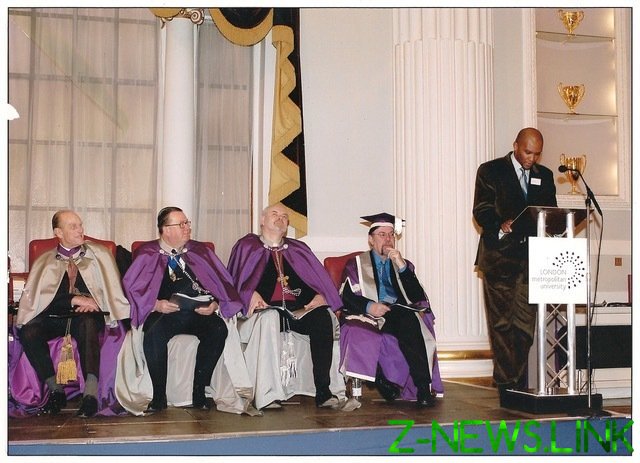 David Matthews (speaking at the podium) and Prince Philip (far left) at the Mansion House, London in 2003

But a decade earlier, there I was, standing at the Mansion House dais just a few feet from the Price Philip – he decked out in a satin purple and grey gown, and me in an ill-fitting olive-green corduroy suit. I’d given the suit to my mother, a seamstress by trade, to take in but despite having a thing for the Queen, she never put needle to thread and thus left me to wear the suit looking like I’d stolen it from a fat bloke’s wardrobe.

Sartorial mishaps aside, I delivered a killer speech, laced with a few one-liners and coded platitudes about how grand it was to get an ‘educashun’ at the university, having been dragged up in the East End, the son of immigrants from a West Indian colony the Duke used to own at one time. As he sat there, grinning inanely, no doubt marvelling that: a) I spoke better English than most of his countryfolk and b) I wasn’t wearing a grass skirt, I contemplated, just for a second, the canard that ‘he who kills the king becomes the king’. What if I lunged at him with my Sheaffer pen? Would all before me bow down in my honour? This idle thought threw me for a second, not least because I had to remind myself that the Duke wasn’t ‘the king’ – and I don’t like prison food or the rope.

Despite his reputation for the odd cultural ‘gaffe’ or what some party poopers call ‘racism’, before, during and after the Mansion House shindig, the Duke never had a bad word to say to me. In fact, he never had ANY word to say to me – at ANY point. As I returned to my seat, and once the fanfare had cranked up again and we had all traipsed off stage, HRH slipped through a side door without a by your leave. Only His Grace, the Bishop of London, commented on my “wonderful speech”. But did I hold it against the Duke? Did I hell. Call me old-fashioned, but I believe monarchs, like children, should be seen and not heard.

Despite having been blanked by HRH, there’s something to be said for not having to listen to what royals have to say once they deviate from the script. In an apparent attempt to hogwash his own well-documented casual bigotry, Prime Minister Boris Johnson offered a typically revisionist view of the Duke’s ‘gaffes’ as simply “trying to break the ice, to get things moving, to get people laughing” in the face of liberal opprobrium. But did the PM have a point? Being able to ‘take a joke’ is as British as warm beer and bad teeth. What the left decries as Prince Philip’s inherent racism, and the right excuses as a bit of a laugh, was, in fact, him being not just a product of his time or class but his culture. In other words, bigotry is woven into the fabric of British society like a fine silk thread.

Take these ‘gaffes’ for example. In 1999, while inspecting a factory in Edinburgh, chancing across an old-fashioned fuse box, the Duke quipped, “It looks as if it was put in by an Indian.” In 2002, during a tour of Australia, he asked an Aboriginal man if he was “still throwing spears”. In 2009, at a Buckingham Palace reception for 400-hundred British Indians, as guests lined up to meet the Queen and the Duke, eyeballing entrepreneur Atul Patel’s name badge, he chuckled, “There’s a lot of your family in tonight.” On a state visit to China in 1986, he told a group of British students, “If you stay here much longer, you’ll all be slitty-eyed.” Once, speaking to a driving instructor in Oban, Scotland, he enquired, “How do you keep the natives off the booze long enough to get them through the test?” Were these jibes offensive? Probably. What about racist? Possibly. Are such ‘jokes’ regularly bandied around pubs, greasy spoons and hair salons across Britain? Most definitely.

For those with a darker sense of humour, or perhaps irony, during his 1961 visit to India, the Duke was photographed with the Queen, the Maharaja and Maharani of Jaipur, and a dead eight-foot tiger he’d bagged while on a hunt, having allegedly also shot a crocodile and six mountain sheep on the same trip. As luck would have it, that same year, Prince Philip became the first president of the World Wildlife Fund UK. Nevertheless, as Johnson reminded us during his touching tribute last Friday, having reinvented himself as an environmentalist in later life, the Duke became a “champion of the natural world”.

During Philip’s last visit to India in 1997, which marked the country’s 50th anniversary of independence, on a visit to Jallianwala Bagh in Amritsar, Punjab, he and the Queen laid a commemorative wreath at the site commemorating the Amritsar Massacre of 1919, in which Acting Brigadier-General Reginald Dyer ordered troops from the British Indian Army to open fire on a large crowd that had gathered for the religious festival of Baisakhi. A plaque at the site reads: “This place is saturated with the blood of about two thousand Hindus, Sikhs and Muslims who were martyred in a non-violent struggle.” Clocking this, however, the Duke took exception to the body count. “Two thousand? It wasn’t, was it?” he said, reputedly. “That’s wrong. I was in the Navy with Dyer’s son. That’s a bit exaggerated… it must include the wounded.”

Just like the Duchess of Sussex’s comment about Buck House questioning baby Archie’s likely skin colour before his birth, the Duke’s contempt for ‘the other’ comes as no surprise. Yet British liberals and lefties love nothing more than ‘triggering’ their Black and Asian countryfolk into obsessing about racism by demonising the monarchy, police, armed services and every other obvious target as an ersatz ‘call to action’.

As the government’s recently derided report on racial disparities shows, public discourses on racism in Britain are becoming less and less about equality and more and more about tribal points scoring. The truth is, for many white people, race is just another air-horn issue, regardless of political persuasion. White liberals condemning elements of the right or the establishment or the state as ‘racist’ has become as tiresome a trope as white reactionaries moaning that they can’t talk utter bollocks in public – while talking utter bollocks in public. The net result is persons of colour like me are voting with our feet, leaving white people to argue till they’re red in the face with each other on maniacal social media platforms and the increasingly neurotic comment columns of online MSM outlets and their dwindling readerships.

Typically, the British left and right, much like our American cousins and their own paranoid political paradigm, can’t navigate the complexities of race and multiculturalism because the only colour either really cares about is ‘white’. Race and racism are merely proxies for white ideologues to duke out their fantastical philosophical battles and phoney culture wars while peacocking their moral outrage or superiority, psychosexual desires, existential fears, ‘rights’ and myriad other mental skirmishes – all of which have nothing to do with black people or Asians simply wanting a quiet life.

In the wake of Princess Diana’s death, then-prime minister Tony Blair scored a PR slam dunk by dubbing her “the people’s princess”. Likewise, as the spirit of Prince Philip floats off to join her on that great big balcony in the sky, I’d like to remember the Duke not as someone remote, from another era or out of touch, but a man on the pulse of quotidian British sensibilities – “the people’s racist”, if you will. It’s what he would have wanted.