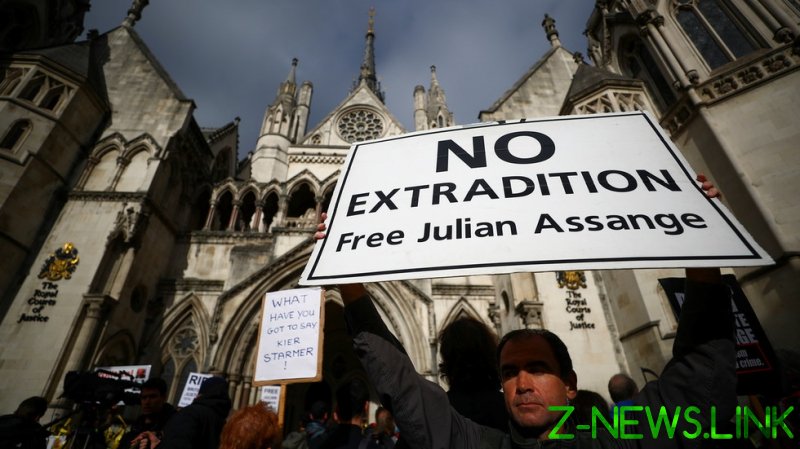 Assange, who has been held in the maximum-security Belmarsh prison since 2019, was ruled ineligible for extradition to the US in January this year over concerns for his mental health. However, Washington is appealing that decision.

Hundreds of protesters rallied outside the court on Wednesday. They held aloft assorted placards in support of the journalist, their demands ranging from releasing him on bail to letting him go altogether, footage from the scene shows. Assange was not allowed to attend the hearing in person, WikiLeaks editor-in-chief Kristinn Hrafnsson said outside the court.

“Julian Assange will not be here in person today. He was denied that opportunity,” Hrafnsson told the crowd, which booed in response.

While it was reported that Assange had been feeling too unwell to attend the hearing even via a video link, he did ultimately appear in a virtual capacity. He was reportedly “coughing and wincing in pain” during the hearing.

The US legal team claims the district judge overseeing the extradition appeal, Vanessa Baraitser, had been misled by Assange’s psychiatrist and they had not been given an opportunity to assuage her concerns. Now, the US has given the UK four “assurances”, insisting that Assange would receive “any clinical and psychological treatment” deemed necessary by prison doctors, would not be held in solitary confinement, would not be sent to a US ‘super-max’ prison, and would be eligible to serve any potential sentence in Australia.

“The assurances are clearly binding on the United States,” said James Lewis QC, the barrister representing the US government.

Assange was expelled from the Ecuadorian Embassy in London in April 2019, arrested by police and charged with violating bail conditions, for which he served 50 weeks. He has been held in detention since that time. He had sought asylum in the embassy in 2012, after Sweden attempted to have him extradited over sexual-assault allegations that he denied and which were later dropped due to weakened evidence and the expired statute of limitations.

Assange and his supporters have long claimed the Swedish case was intended to detain him for surrender to the US, where he is facing espionage charges over WikiLeaks’ publications of classified US documents on the wars in Iraq and Afghanistan.