Home / WORLD / Julian Assange is a ‘journalist of distinction’ & has to be set free, Jeremy Corbyn tells RT outside UK’s Belmarsh Prison

Julian Assange is a ‘journalist of distinction’ & has to be set free, Jeremy Corbyn tells RT outside UK’s Belmarsh Prison 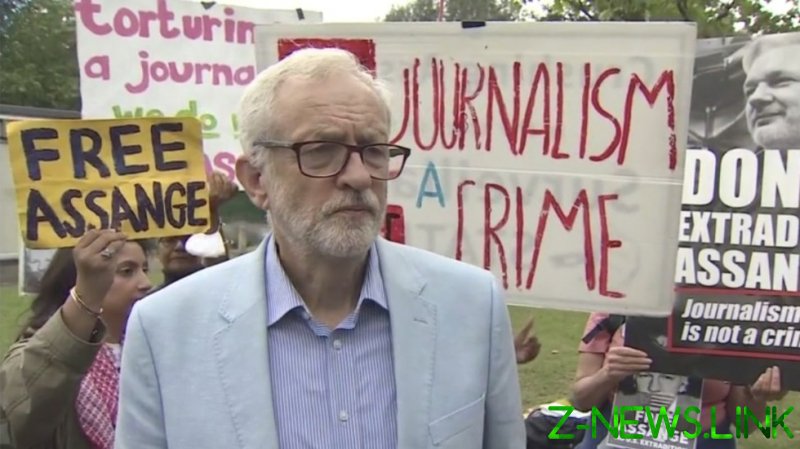 A group of British members of parliament have come to the walls of Belmarsh maximum-security prison in south-east London on Tuesday to protest the lack of transparency in Assange’s case.

The MPs said their requests to meet with the founder of the WikiLeaks whistleblower website, who is wanted by Washington on espionage charges over the publication of classified documents on Iraq, Afghanistan, Guantanamo Bay prison and others, have been denied repeatedly.

They also handed a letter that had the signatures of 20 deputies from four parties under it and detailed their demands to the prison authorities.

Corbyn insisted that he didn’t see any valid reasoning for their requests to talk with Assange to be rejected. “The governor is trying to claim there’s discretion on it. We don’t think there’s discretion,” he explained.

The politician, who led the Labour Party between 2015 and 2020, said that over the years he had visited inmates in many prisons, including Belmarsh, as a member of parliament. “It’s perfectly normal that MPs are granted with due process a facility of a visit,” he said.

“We now want a group of us to talk to Julian, probably via video link, in order that we can discuss his case and help to form our own opinions and encourage other members to understand their role in what I hope would be a very strong campaign to prevent his extradition away from this country.”

Assange can’t be extradited to the US; moreover, he should’ve been set free by Britain months ago, Corbyn pointed out.

A UK court had refused Washington’s extradition request over Assange’s poor mental health in early 2021, and “at that point, the case has ended or should have done,” the 72-year-old socialist icon said. But the US announced plans to appeal against the ruling, leaving Assange in Belmarsh and maintaining the possibility of him being “extradited to the US where he would face a minimum prison sentence of 125 years.”

“We have appealed to President Biden to not go ahead with this appeal; to drop the case, so that Julian can be free,” the former Labour leader added.

Assange was placed in Belmarsh in April 2019 for a breach of bail, after being holed up in the Ecuadorian Embassy in London for seven years, fleeing sexual assault allegations that never transformed into actual charges. The WikiLeaks founder has always denied those allegations, with his supporters insisting that he had been persecuted for his professional activities.

Corbyn described Assange as “somebody that has stood up for truth around the world. He’s helped us to understand what happened in Guantanamo Bay and so many places around in the world where the US military has done terrible things. We think that he’s a journalist of distinction.”

Assange’s partner and mother of two his children, Stella Morris, had visited him at Belmarsh on Tuesday, telling the journalists that he was “incredibly moved” by the support provided to him by the British MPs and the public. “Julian is a political prisoner in the UK… and it has to end,” she insisted.