Actor and former California Governor Arnold Schwarzenegger, known to many for her role as a humanoid robot in the film series “Terminator”, has filed a lawsuit to the Russian Promobot. Representatives from Schwarzenegger’s demand to ban the company to produce robots with the appearance and voice actor, and want to seek compensation in 10 million dollars. It is reported portal TMZ.

We are talking about the model of the robot, Robo-C, which the company Promobot was first presented in April last year and started selling in September. At the customer’s robot companion can have any appearance.

“The robot is a fully anthropomorphic car. He copies the emotions of a man: the ability to move the eyes, eyebrows, lips and other “muscles” as well as to support conversation and to answer questions. The technology, developed in the Promobot, as well as its own patented design, allow you to play over 600 options micromite man, the most realistic mimicking his emotions. The company’s specialists have created our own component base, and also used their technology to create artificial skin”, – noted in the company.

As argued by the Chairman of the Board of Directors Promobot Alexey Yuzhakov, Schwarzenegger saw the robot during his visit to St. Petersburg, and “he and all his partners loved the” presentation. However, the article TMZ stated that the actor, who is very sensitive to the use of his appearance because of the possible reputational losses, refused to be photographed with the robot, and later asked the company not to use its appearance. But this year, Robo-C, similar to Schwarzenegger were seen held in U.S. exhibitions of CES and the New York Toy Fair.

.@Schwarzenegger”s creepy robot figure wants to be your friend! Arnold you down to be friends with it? 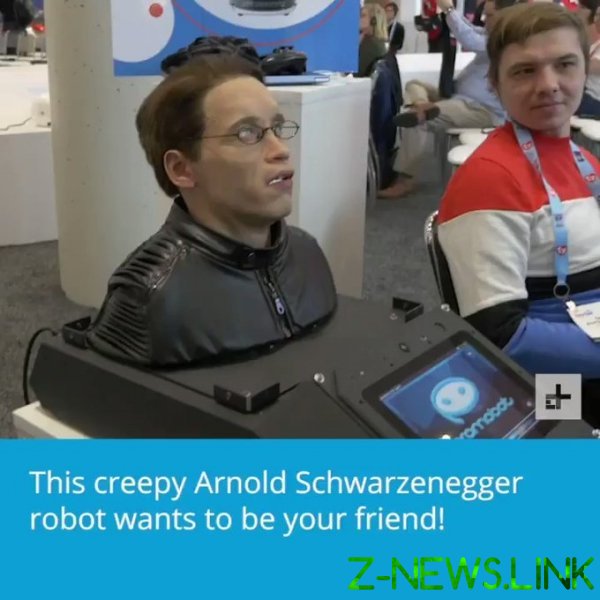 34 people are talking about this

The representative Promobot Egor Umnov told “Vedomosti” that the company has not yet received the suit actor. “We, like everyone else, learned about it from a publication on TMZ” – he said, noting that Promobot is negotiating about the terms of use of the image with the representatives of the Schwarzenegger for several months. “The law which regulates this issue, different in different countries. For example, in Russia the appearance of the person is not an object of copyright, and in Europe there are regulations GDRP. So negotiations are long,” he added.

The Promobot company was founded in 2015 in Perm, and soon became a resident of SKOLKOVO. As stated on the company website, now Promobot is the largest manufacturer of Autonomous service robots in Russia, Northern and Eastern Europe. Robots of the company are supplied in several dozen countries, where they are used as consultants, tour guides and concierges.

Note that Promobot has already attracted the attention of loud acts. So, last year, media outlets around the world wrote about the impact moving in the autopilot mode of the Tesla electric car at a robot company in Las Vegas. Soon, the users suggested that the sensational video of an unusual road accident was staged.