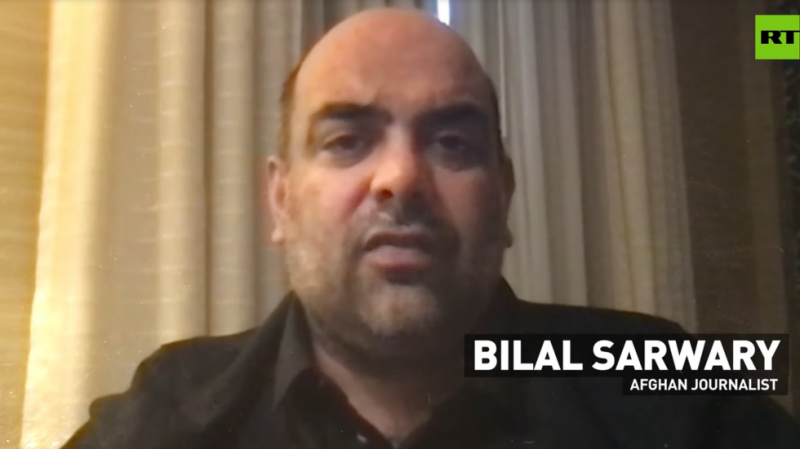 Afghan journalist Bilal Sarwary has dedicated years of his life to being one of the voices telling the world about his country. The job has taken a heavy toll on him, as there was rarely any good news to report amid the never-ending war.

“And as I continued telling the world about Afghanistan, I became very heart-broken; there was little good news that I could tell the world,” Sarwary told RT.

The occupation of Afghanistan by the US-led Western alliance over the past 20 years was a very troubling time for the country. Still, the Afghans at least had some hope. Now, however, with the Taliban takeover and hasty withdrawal of the remaining Western forces, Sarwary says all of it is lost.

Facing pressure from the Taliban, the journalist was ultimately forced to leave the country, even though he never intended to do so. “I’ve always dreamed about Afghanistan being peaceful. I’ve had no intention of leaving Afghanistan, because I’ve been to the West, I’ve been all over the world – I’ve studied in the US and I came back with a sense of commitment to be living in Kabul, hoping that my daughter and my family could live a normal life,” Sarwary said.

A similar sentiment is shared by Mustafa Samimi, a 19-year-old refugee from Afghanistan, who has seen nothing but war for his entire life. The young man recently left the country, ending up in Turkey after a daring journey through the mountains of Afghanistan and Iran.

“When I was in Afghanistan, things got worse and worse every day. I’d never thought about coming to Turkey,” Samimi told RT.

While many had complete faith in America and the prospect of transforming Afghanistan into a better place to live, all that hope is lost now, the refugee said.

“The Americans came and we believed in them, everyone saw another life. But in the end, everything happened so fast and we were left all alone. We were abandoned. Everyone was trying to survive,” he said.

Hope aside, there was little actual opportunity to realize one’s dreams, given the persistently bad economic situation and the corruption of the now-defunct government, Samimi believes. The Afghan people have been ultimately betrayed by the country’s own leaders and politicians, he says, many of whom fled Afghanistan amid the collapse of the government and the Taliban takeover, leaving the common folk on their own.

“I’ve had many dreams and not even one of them could have come true in Afghanistan with the economic problems, the lack of jobs and opportunities,” Samimi said. “Our leaders, our politicians were all traitors and thieves, all of them fled and live in other countries while the poor people of Afghanistan have been left in misery.”