Home / sports / Joshua in a difficult fight knocked out of Takama

Joshua in a difficult fight knocked out of Takama 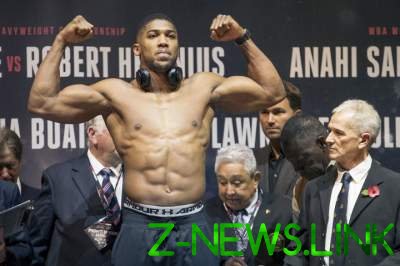 WBA, IBF and IBO Anthony Joshua in Cardiff ahead of schedule dealt with the applicant on the line IBF Carlos takama.

The first opponent Joshua after the epic victory over Klitschko was supposed to be Kubrat Pulev, the Bulgarian, however, a few weeks before the fight I injured my shoulder. According to the rules of the IBF took his place next to the rating of the boxer – it was the Cameroonian Carlos Takam, who last year lost to Joseph Parker, and three years ago was knocked out by Alexander Povetkin.

See also:  Dnepr: the car knocked down a child in a wheelchair

Joshua predicted an easy victory over the Challenger, but Takam almost interrupted by a series of knockouts new king of the heavyweight division. The Cameroonian firmness lasted until the tenth round, while the referee in the ring is not got excited and stopped the fight after mnogomernoi combination of Joshua.

At the time of the controversial stoppage Joshua unconditionally was in the lead on the scorecards. 10 incomplete rounds, the champion struck 152 precise strike (61 jab, 91 power). Strikes Takama 52 times reached goal (16 jabs, 36 power).

See also:  NBA: Utah knocked out "clippers", "Boston" took the lead in the series against Washington

“It was a good battle, until the referee stepped in. I respect Takama for such a great show. I followed him and took in the battle round by round, but
the referee stopped the fight, although I think many would like to see my early victory,” said Joshua after the battle.

Anthony Joshua, having 20 an early victory in a row, broke the record of Mike Tyson, who at the start of his career, he has achieved 19 knockouts in a row.