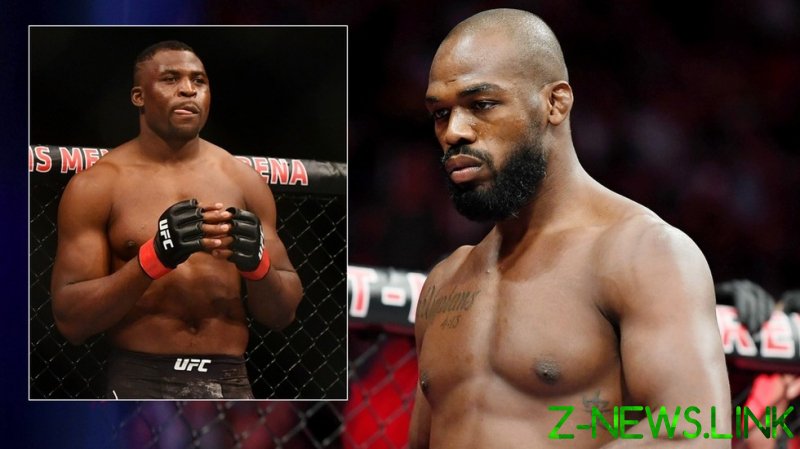 Jones and Ngannou have been going back and forth in recent days despite UFC chief Dana White stating that a potential superfight between the pair is all but dead due to Jones’ financial demands.

That has not stopped the former longtime 205lbs champion from talking up his chances against Ngannou – who was crowned UFC heavyweight king with an explosive second-round KO of Stipe Miocic at UFC 260 in March.

Ngannou, 34, responded to the threat with disdain, retorting: “Please don’t make me laugh. When is the last time you break somebody out?”

“You’re a decision fighter,” Ngannou added in a subsequent tweet. “And you’ve barely won a fight lately. But you’re going to break me out.”

Jones – who has seen seven of his past eight octagon victories come by way of the scorecards – did not take the remarks lying down.

“A decision fighter? I carried the record for most submissions in the light heavyweight division for many years my friend,” Jones fired back.

“You are what we call a one trick pony… every champion I’ve ever faced punched hard. I see right through you.”

“I would rather be a decision fighter than a last for two rounds fighter,” Jones added in another tweet.

“Honestly, I respect you and your story. I don’t feel the need to have to crush you in a verbal battle to what I’ve done to everyone since 2011…

“I’m just telling you now, if you want to start this Internet talk, be sure to keep it up. Most people that talk sh*t with me go quiet after a while. Everyone’s going to the first to smash Jon Jones, very popular theme,” added the 33-year-old.

Jones is yet to suffer a legitimate loss in 28 professional MMA contests, and famously became the UFC’s youngest ever champion when he won the light heavyweight title aged just 23 by beating Mauricio Rua a decade ago.

Success in the octagon has been followed by controversy outside of it – including run-ins with the law and doping authorities.

Jones last fought in February 2020 when he defended his title against Dominick Reyes, only to vacate it in August amid a pay row with the UFC.

After Ngannou was crowned heavyweight champion, Jones demanded that the promotion “show him the money” to set up a superfight between the pair.

Talks stalled before they even got started, with UFC boss White accusing Jones of asking for a minimum of $30 million for the contest – something the fighter himself has disputed.

Instead, White has suggested heavyweight veteran Derrick Lewis will be the first title defense for Ngannou, who last week proudly displayed his belt on a tour of his homeland.

While fans might not get to see Ngannou and Jones meet in the octagon, in the meantime they are swinging hard at each other online.