Home / FUNNY NEWS / Joke of the day: the bride rejected the groom correctly standing on knees

Joke of the day: the bride rejected the groom correctly standing on knees 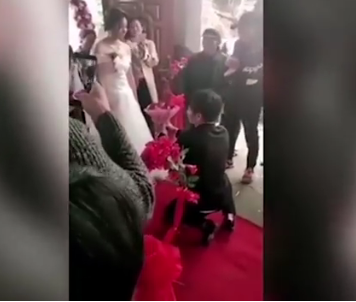 The chosen one stood in front of the bride on both knees.

In China, the bride in front of the altar, dumped her fiancé because he incorrectly stood on his knees before her.

In the Internet appeared the video with a Chinese wedding. The footage shows that the future newlyweds are in the room at the wedding ceremony. The young man kneels and holds a bouquet of his favorite, offering her to marry him. However, the girl was very unhappy that the choice stood before her on both knees instead of one, and refused to accept the flowers, which actually means “no.”

Guests embraced the act of the bride as a joke and invited the young man to straighten up and stand in front of a girl correctly. A resident of China got down on one knee, however, offended the Chinese did not take the flowers from the hands of the frustrated husband.