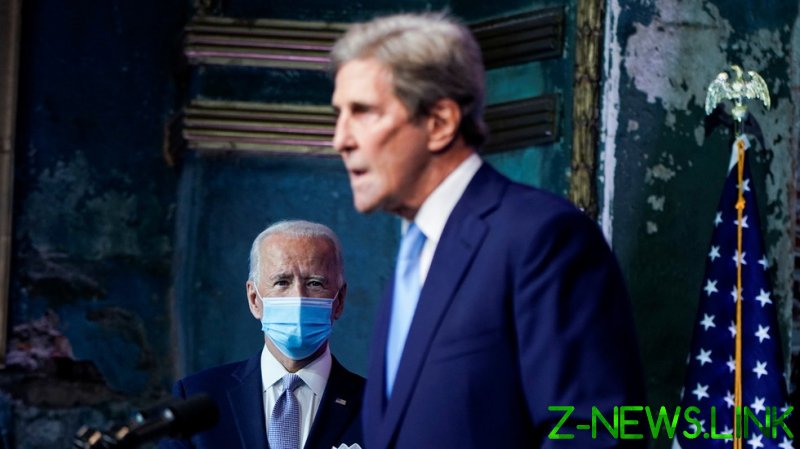 A mostly maskless Kerry was photographed by a fellow passenger while on a flight from Boston to DC on Wednesday, with the image first obtained by the Tennessee Star. At the time, he was reportedly not eating or drinking, thereby violating President Joe Biden’s federal mask mandate, which applies to all forms of interstate travel.

Alerted to the photo, American Airlines vowed to “look into” the incident in multiple Twitter posts, also giving a separate statement to media outlets later on Wednesday evening noting that the company would contact Kerry to reiterate its mask policies.

“The crew did not observe Secretary Kerry without a mask, and they were not alerted by other customers to a non-compliance issue,” an airline spokesperson said. “We continue to review the matter and we are reaching out to Secretary Kerry to underscore that all customers are expected to wear masks for the duration of their trip.”

The airline’s apparently permissive attitude toward the high-profile politician differs sharply from its treatment of its less powerful customers, booting a family of 20 off a flight earlier this year for a minor mask infraction.

The passenger who snapped the hot-button photo, who asked not to be named, told Fox News that Kerry had worn his mask before boarding the plane, but removed it soon after finding his seat and only put it back on later in the flight. They heaped mocking praise on the ex-secretary of state.

“I salute our Very Special Presidential Envoy for Climate for not flying private, but instead flying first class commercial with the rest of us common folk,” joked the passenger. “And while he can’t bring himself to follow his own party’s mask restrictions, we should cut him some slack.”

Another netizen claiming to have sat adjacent to the climate envoy on the flight, Bryce Strahorn, also weighed in, saying Kerry pulled his mask to one ear only briefly and that the flight was “fairly empty.” The passenger also told the New York Post’s Steven Nelson in a Twitter exchange that Kerry had shook hands with others on the plane, though didn’t clarify whether he did so while his mask was off.

While Kerry was vaccinated against the coronavirus last month, American Airlines policy, as well as Biden’s federal mandate, do not exempt those who’ve received the inoculation.