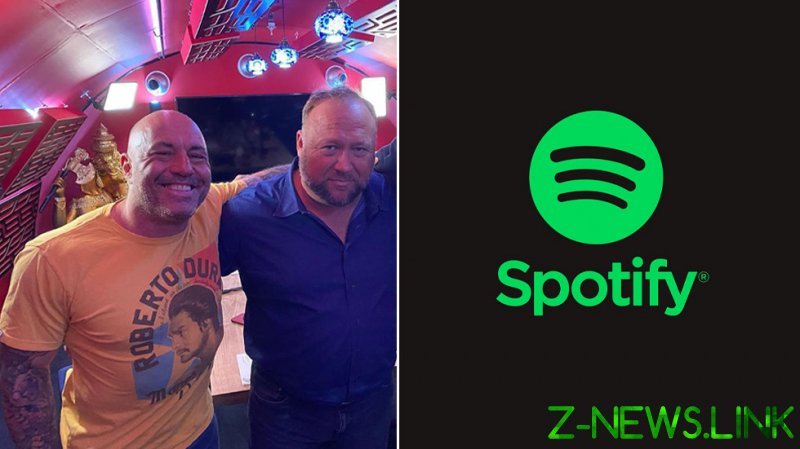 Rogan’s Tuesday show turned out to be even more polarizing than usual – and somewhat unexpected given that the podcast’s fans noticed in recent months that some episodes featuring conservative guests curiously never made it onto Spotify, where Rogan has an exclusive deal. Jones himself was previously banned on the platform in 2018, with Spotify citing “hate content” as the reason.

His reappearance on the show seems to have cleared up suspicions that Rogan had succumbed to editorial scrutiny following the missing episodes and his recent retraction after pushing debunked claims that left-wing activists had started wildfires in Oregon.

While neither Spotify nor Rogan confirmed any clash over the podcast, fans appeared somewhat divided about the decision to host Jones: some were afraid of potential political censorship, while others cheered for a safer approach to news content than inviting a guest best-known for promoting various political conspiracy theories.

Some who said they had defended Rogan in the past would not any more as giving a voice to Jones was “unforgivable.”

Yet, many of Rogan’s listeners simply reveled in what they saw as an anti-corporate win for free-speech.

One quipped that they could “hear the sounds of Spotify employees crying over Alex Jones dropping truth bombs on Joe Rogan.”

Some were so outraged by the episode that they vowed to immediately cancel their Spotify subscriptions.

Others, however, saw the episode as a reason to support Spotify, thinking that the audio-streaming giant allowing Jones on its platform was an anti-censorship move.

Despite the overwhelming social media reaction to the show’s newest episode, both Rogan and Spotify are yet to comment on it – and it remains accessible on the platform. Rogan even seemed to agree during the show to have Jones on again for his US Election Day special.