Home / WORLD / Joe HIDDEN: POTUS avoids even the friendly media as Americans get cat, dog and portrait distractions instead

Joe HIDDEN: POTUS avoids even the friendly media as Americans get cat, dog and portrait distractions instead 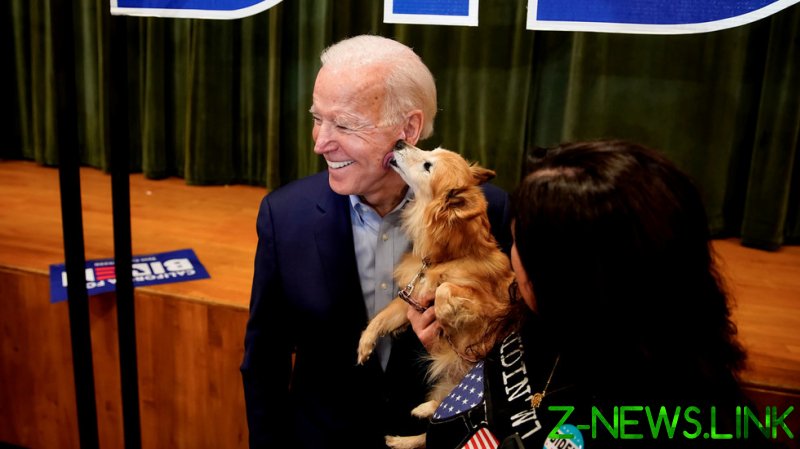 Even when going on carefully orchestrated photo ops – as he did on Tuesday at a Washington, DC hardware store – Biden’s handlers prevent him from taking any questions from reporters. Last week, during a virtual meeting with fellow Democrats, he even said he’s “happy to take questions if that’s what I’m supposed to do,” only for the White House to cut the feed.

Nothing to see here, folks, move along? That seems baffling, as the press is as friendly to this administration as it was intractably hostile to the previous one. Little wonder polls show Americans increasingly doubting the 78-year-old’s mental fitness.

The very same media that sought to interpret everything as a sign of Donald Trump’s mental decline is strenuously averting its gaze from Joe Biden, though. White House press secretary Jen Psaki keeps giving non-answers to all questions of substance, promising to “circle back” whenever she’s not responding with a meaningless word salad.

They’re such hard-hitting questions, too, from whether Biden will change the color scheme of Air Force One to what happened to the promised White House cat. Seriously, she was asked on Tuesday about the months-long rumor of the first feline, only to say she doesn’t have any updates, but that the cat will “break the internet” when it appears.

Given the recent escapades of other White House pets, however, chances are the cat will go the way of the “immediate $2,000 checks” and other Biden promises.

During the campaign, Democrats shamelessly pandered to the Americans’ love of animals, with Biden promising he would restore dogs to the White House and pointing to his rescued German Shepherds. The first pups spawned many a cringe-worthy pun during the past two months, but now they’re in the doghouse after one of them was involved in a “biting incident.”

A dog bed was seen propped up on the external wall of the White House on Tuesday, as Psaki told reporters that the 3-year-old Major was “surprised by an unfamiliar person and reacted in a way that resulted in a minor injury to the individual.”

Major and his 13-year-old companion Champ were thus deported from Washington to the Bidens’ estate in Delaware. Psaki says the move is temporary, of course. Either way, the dogs’ departure is a setback both for the Biden image and for the media, who fawned over the pets in an effort to contrast him with Trump. The 45th president famously didn’t have any and even said once that it “felt a little phony” to get a dog for political clout.

Deprived of the four-legged gambit, the press then shifted gears to art, pointing out that the Biden administration has “restored” the official portraits of the 42nd and 43rd presidents to their traditional spots, after they were moved “to a less prominent location” last year. Truly “relentless” media coverage there.

Then again, it could be subliminal propaganda; Trump had routed both the Clinton and Bush political dynasties on his way to the presidency in 2016, and “restoring” their portraits fits the narrative of the Biden presidency being a restoration of the Obama “normalcy” upset by the uncouth usurper.

On Monday, Biden struggled with the name and title of Defense Secretary Lloyd Austin – who was literally standing right behind him – during a speech promoting female generals, and described him as “the guy who runs that outfit over there.” To precisely no one’s surprise, the incident was laundered by having “Tim Apple” trend on Twitter, referring to the time Trump had addressed Apple CEO Tim Cook that way.

This is what the media, both new and traditional, choose to do rather than wonder why the fully vaccinated Biden is still going around wearing two masks, or why he hasn’t scheduled an address to Congress that’s been traditional since the 1970s. Are “norms” irrelevant all of a sudden? The White House isn’t even using the coronavirus as an excuse, it’s simply offering none – and that’s just fine in Our Democracy, nothing to see, move along.