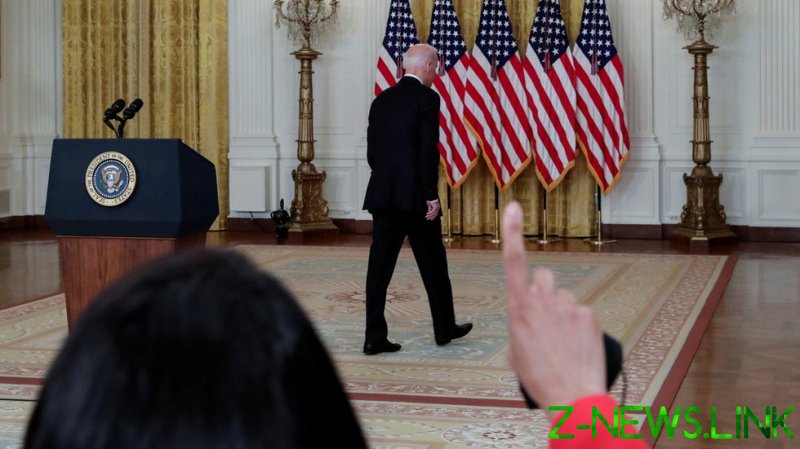 It was a well written speech–on that, most people agree. The draft talking points had been widely shared with the important political powers beforehand, underscoring the reality that the speech was more about massaging domestic politics than projecting fact-based reality. Given Joe Biden’s resumé, this should not have come as a shock to anyone who watched the 78-year-old first-term President/47-year veteran of Washington, DC politics step up to the podium yesterday to finally speak on the unfolding crisis in Afghanistan.

“I always promised the American people that I will be straight with you.” The fact that Joe Biden uttered that sentence with a straight face underscores the decrepit nature of American politics today, because other than acknowledging that the situation on the ground in Afghanistan unfolded “more quickly than we had anticipated,” nothing Joe Biden said could be construed as “straight talk.”

“We went to Afghanistan almost 20 years ago with clear goals, get those who attacked us on September 11th, 2001, and make sure al-Qaeda could not use Afghanistan as a base from which to attack us again. We did that. We severely degraded al-Qaeda in Afghanistan. We never gave up the hunt for Osama Bin Laden and we got him. That was a decade ago.”

What Joe Biden fails to address is that the US, from the start, conflated Al Qaeda with the Taliban, and as such our war was as much about defeating an Afghan tribal reality as it was about getting Osama Bin Laden. One only needs to read the accounts of the opening phase of the US military action in Afghanistan, on October 8, 2001, to realize that we were at war with the Taliban more than Al Qaeda.

Moreover, having failed to kill Bin Laden at Tora Bora in December 2001, or destroy Al Qaeda during Operation Anaconda, in March 2002, the United States then abandoned Afghanistan, with the critical mission of destroying Al Qaeda and the Taliban unfinished, to begin preparations for the invasion and occupation of Iraq.

True, the US was able to locate and subsequently kill Osama Bin Laden in May 2011. But the fact that US Special Operations Forces and CIA paramilitary assets continued to wage a difficult and increasingly bloody counterterrorism campaign after that point only underscores the reality that the Bin Laden raid was not the game-changing event Joe Biden made it out to be.

When a nation invades and occupies another, in the process removing the original form of government with one of your own choosing, it is, by definition, engaged in nation building. Semantics aside, the fact is that the heart and soul of the non-counterterrorism mission of the US military in Afghanistan was defined by the work of so-called Provisional Reconstruction Teams. Their tasks were quintessential nation-building exercises, highlighting the revisionist fantasy world that Biden and his advisers have constructed to justify their current actions. Biden may have been personally against embarking on nation-building endeavors when he was Vice President, but the fact is that nation building was the core mission of the United States in Afghanistan, a truth Joe Biden cannot erase by simply declaring that it never was.

“We conduct effective counter-terrorism missions against terrorist groups in multiple countries where we don’t have permanent military presence. If necessary, we’ll do the same in Afghanistan. We’ve developed counter-terrorism Over The Horizon capability that will allow us to keep our eyes firmly fixed on the direct threats to the United States in the region, and act quickly and decisively if needed.”

Anyone who claims that an “over the horizon” ability to identify and destroy targets constitutes a viable counter-terrorism capability doesn’t know the first thing about counter-terrorism. At the end of the day, true counter-terrorism is a human-intensive effort, requiring the ability to intermingle with the mass of humanity in which the targeted elements operate, and to exploit this humanity for intelligence that not only leads to the neutralization of a given target, but, more importantly, the degradation of the ability of those affiliated with the target to operate and reconstitute the lost capability represented by the neutralization in question. This doesn’t happen by simply flying a drone packed with electronics and cameras over a target area and firing a precision guided munition at a specific point on the ground.

Biden has spent much of his recent political career espousing a counter-terrorism strategy that has no basis in reality. I would challenge anyone to find a veteran CIA counter-terrorist hand with on-the-ground experience in Afghanistan who believes the work he/she did could be replicated by some pie-in-the-sky ‘over the horizon’ capability. Moreover, for Biden to proclaim that the US does this elsewhere, without acknowledging the role played by US intelligence assets on the ground, shows he is either disingenuous in the extreme, ignorant of reality, or both. Qassem Soleimani, the Iranian general responsible for Iran’s unconventional warfare operations, may have been killed by a drone-fired missile. But every other aspect of that targeted assassination was linked to human intelligence, including the presence of US covert military teams on the ground to complete the mission should the missiles have failed.

There is an old saying that goes something like this: ‘you cannot solve a problem unless you first accurately define it.’ In laying out the challenge confronting America on Iraq, Joe Biden either deliberately lied or at the very least was economical with the truth when it came to defining the US experience in Afghanistan. As bad as his deceptions about nation building and counter-terrorism were, he saved his biggest insult for the Afghan military and security forces.

“American troops cannot and should not be fighting in a war, and dying in a war that Afghan forces are not willing to fight for themselves.”

The efficacy of the US training mission in Afghanistan will be the subject of intense debate for years to come, with many people rightly pointing out it was a bridge too far from the get go. This may be true. But the reality is that the Afghan military did fight, and die, in the 20-year struggle against the Taliban and Al Qaeda. Nearly 60,000 Afghan soldiers and police officers lost their lives in combat during America’s 20-year war there. Hundreds of thousands of others were wounded. These figures do not include casualties incurred in the latest round of fighting.

Yes, the US trained a standing force of some 300,000 Afghans ostensibly organized and equipped to wage war against the Taliban. The reality is, however, that the vast majority of these troops were poorly trained, poorly equipped, and abysmally led. They would provide a presence if they were backed up by either US, NATO, or elite Afghan special forces, but void of that, they melted away at the first sign of adversity–and this was before the recent collapse. The US did train tens of thousands of elite commandos, organized as military (under the Defense Ministry) or paramilitary (under the Afghan intelligence service) forces. These units were involved in extremely intense fighting against the Taliban and suffered extremely high casualties as a result.

Replacing a conscript Afghan soldier is not difficult; replacing a combat-hardened Afghan commando is virtually impossible. When the US withdrew from Afghanistan, we left these elite forces alone to fight the Taliban. Lacking US logistical support, these forces found themselves cut-off, out of food, water, and ammunition, and subsequently destroyed. They could not be replaced. The Afghan military that could fight the Taliban did, in fact, fight the Taliban, often to the death. This does not excuse the hundreds of thousands of Afghan conscripts who subsequently melted away without a fight.

For Joe Biden to stand in front of the American people and not acknowledge the last true measure given by the elite Afghan forces we trained to carry on a fight we started is beyond despicable. It is, literally, conduct unbecoming a commander in chief.