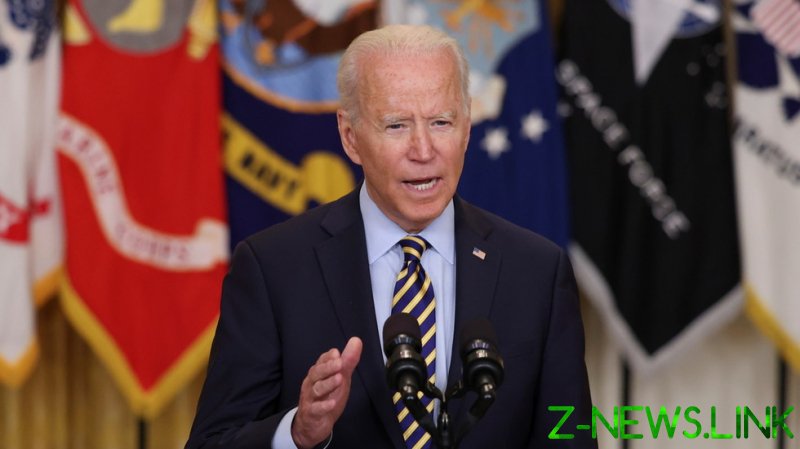 Joe Biden is living proof that American politicians live in an artificial universe of their own construct. In a televised presentation to the American people on July 8, 2021, the US President discussed the status of the ongoing withdrawal of US military forces from Afghanistan, announcing that this mission would be completed by the end of August 2021, ahead of his promised termination date of September 11.

Biden did everything but hold a ticker tape parade up New York City’s “Canyon of Heroes” to make the case that the withdrawal of US forces was the fitting conclusion to a 20-year conflict whose objectives had been met. “[T]he United States did what we went to do in Afghanistan,” Biden said, “to get the terrorists who attacked us on 9/11 and to deliver justice to Osama Bin Laden, and to degrade the terrorist threat to keep Afghanistan from becoming a base from which attacks could be continued against the United States.  We achieved those objectives.”

The truth be told, the US did—finally—administer “justice” to the architect of the 9/11 attacks in the form of a commando raid on Bin Laden’s compound in Abbottabad, Pakistan on May 2, 2011 (an action, it should be pointed out, that Biden at the time opposed). Whether or not the US succeeded in degrading the terrorist threat to the degree necessary to prevent Afghanistan from ever playing host to anti-American terror organizations is a question very much up in the air.

From a US perspective, the Taliban is a terrorist organization, having been added to the list of Specially Designated Global Terrorists (SDGT) by executive order in July 2002. According to the Afghan government, the Taliban and al-Qaeda are undividable, with the ties between these two organizations “even stronger than 2001”—that is, before 9/11. And yet, in his speech, Biden emphasized that the Taliban “is at its strongest militarily since 2001.” Only a politician blind to reality could make a case that the US has degraded the terrorist threat emanating from Afghanistan.

This unfortunate state of affairs does not, and cannot, be used to justify a continued American military presence in Afghanistan. We lost the war, as any reader of the Special Inspector General’s “Lessons Learned” report on Afghanistan knows. And Biden is right, remaining in Afghanistan “one more year” in an effort to change this outcome “is not a solution but a recipe for being there indefinitely.” But declaring victory before running away with your tail between your legs is dishonest, cowardly, and beneath contempt.

“We did not go to Afghanistan to nation-build.” That Joe Biden could make such a statement with a straight face is indicative of the pathology of indifference to the plight of the Afghan people that resides inside the White House, and the utter contempt Biden has for the men and women of the US military who gave their last full measure to successfully execute that very mission.

When the US made the decision to invade and occupy Afghanistan with the goal of not only eradicating al-Qaeda, but also removing the ruling Taliban from power and replacing them with a western-oriented government, it assumed a nation-building posture. As military historian Frederick Kagan noted, “[R]egime change is inextricably intertwined with Nation Building.” The US succeeded in removing the Taliban from power, and yet struggled for nearly a year trying to come up with a plan about what to do next.

Then-President George W. Bush had campaigned during the 2000 US Presidential election against using the US military in a nation-building role. Yet when it came to Afghanistan, Bush changed his tune, and in 2002 ordered the US military, in conjunction with civilian humanitarian and aid agencies, to begin its “Provincial Reconstruction Team” (PRT) program in an effort to enhance its nation-building capacity. But, as John Sopko, the Special Inspector General for Afghanistan Reconstruction testified to Congress in January 2020, after nearly two decades of engagement in Afghanistan, the loss of more than 2,300 US servicemembers, and the expenditure of more than $133 billion in reconstruction costs, the US experiment in nation building in Afghanistan had failed—egregiously so.

With all due respect to Joe Biden, we did go into Afghanistan to nation-build. It was a core element of our mission, conducted hand-in-glove with our counter-terrorism effort. We did not accomplish the mission. And this failure underpins the decision to expeditiously withdraw from the country. Our military draw-down can be couched in any number of ways, and in the weeks to come, the Biden administration will undoubtedly perform extraordinary displays of verbal gymnastics to cover up what is in fact an inglorious, ignominious retreat from a military defeat as decisive as the one suffered in Vietnam 50 years ago.

The inability and/or unwillingness for Joe Biden to acknowledge this defeat is the root cause of the human tragedy that is about to befall the people of Afghanistan. All of Biden’s colorful talk about the US continuing to provide assistance to the Afghan government and people is little more than a collection of mealy-mouthed lies known by the President and his advisors to be untrue the moment he spoke them. For any problem to be solved it must first be accurately defined; devoid of this, any “solution” proffered is doomed to fail, for the simple reason that it is solving nothing. Without an acknowledgement that the US failed in its nation-building mission, there is simply no US plan for dealing with the post-American reality of Afghanistan. The Taliban will pour into the vacuum created by the US withdrawal, empowered and emboldened by the scope and scale of their victory.

Biden could have forestalled or even prevented this inevitable outcome simply by being honest about the reality of a US defeat, and seeking the assistance of Afghanistan’s neighbors and the international community at large in coming up with a plan to deal with this defeat that didn’t include the indefinite presence of the US military. Instead, Biden opted to run away in the dead of the night, abandoning a nation we failed to build populated by a people foolish enough to call us a “friend.”

Afghanistan is a 20-year construction project gone bad. Not only has the US failed to build a viable structure, we allowed that structure to be occupied by people who trusted us when we said we would complete the project. Whatever the US built will collapse of its own volition, taking down with it anyone clinging to the hope that the US will behave honorably. Had Biden been possessed of even a modicum of honor, he would have admitted the US failure, and sought to turn over this construction project to parties who would either seek to bring it to completion in some heavily modified form, or at least stabilize the structure while those inside could be evacuated and resettled.

Admitting defeat is just not in the American DNA. This genetic defect is on display for the entire world to see in the form of Joe Biden’s commentary on Afghanistan. The question facing the world now is not how the US will behave regarding Afghanistan—this fact is already known. The real question is why, after seeing how the US treats its erstwhile friends and allies, any nation would ever deign to trust America again.