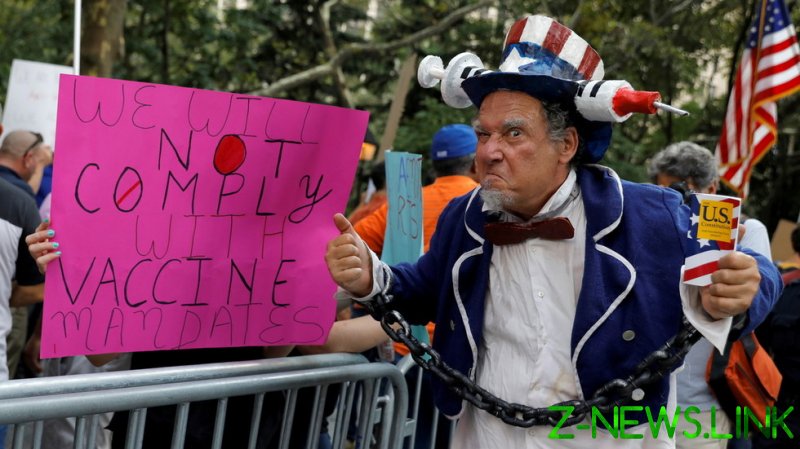 Despite pledging in the past that he would never force Americans to roll up their sleeves for a mandatory vaccine, that is exactly what President Joe Biden announced this week to a nation already sick and tired of masks, lockdowns and political infighting. Worse, the US leader stoked divisions inside of the country, where many fear the rise of a medical-style apartheid, by singling out the unvaccinated for blame.

“We’ve been patient,” the 78-year-old Democrat lectured, carefully reciting his tele-prompted words. “But our patience is wearing thin, and your refusal has cost all of us.” The unvaccinated among us “can cause a lot of damage, and they are.”

Biden’s mandate would force companies with more than 100 workers to get vaccinated or test for the virus weekly – at prohibitive costs to employers. At the same time, the roughly 17 million workers at health facilities that receive federal Medicare or Medicaid will also need to be fully vaccinated.

American conservatives – borrowing a page from the Liberals’ pro-abortion playbook that commands ‘my body, my choice’ – lit up social media with an array of questions, including the much-repeated riddle: ‘If the vaccine works so well, and you are protected, [what] matter is it to you if others refuse the shot?’ To date, some 80 million Americans remain unvaccinated.

Not a few of these people are demanding to know what happened to the time-proven biological function known as ‘natural immunity.’ Will those citizens who survived a nasty bout of Covid in the past, and now have the antibodies, still be required to have the vaccination? Dear leader wasn’t showing his cards.

Or what about safety of the vaccines, which remains another concern for many Americans? As documented by VAERS (Vaccine Adverse Event Reporting System), thousands of people have experienced “adverse events” after being vaccinated. VAERS received over 7,400 reports of deaths among people who received a Covid-19 jab. It’s unclear, though, whether the vaccine was the cause.

Meanwhile, Big Pharma, which is reaping a bonanza from the pandemic, enjoys total indemnity from any lawsuits that may arise from vaccine-related injuries.

In their ongoing quest for information on such issues, the mainstream media have been carefully selective as to which doctors and what sort of advice their audiences are permitted to hear. And, let’s be honest, does anybody really trust a single word that comes out of Tony Fauci’s mouth anymore?

Biden’s brazen move goes against ‘American values,’ where personal choice is the defining element of democracy. Thus, it seems that the establishment has only itself to blame for the ‘vaccine hesitancy’ that many Americans are now experiencing; closing down discussion, while coercing people to take a drug against their will, does little to foster a climate of trust.

Meanwhile, aside from the question of personal health, there is the question of politics – bad politics, to be more precise. First and foremost, Joe Biden blatantly lied to the American people when he promised to never force vaccines on the country. At the same time, he snubbed Congress and the states by empowering the Department of Labor’s Occupational Safety and Health Administration (OSHA) to enforce the vaccine mandate – yet another example of Biden abusing the executive office.

The Republicans, who have gone to great lengths to keep their cities and states open for business during the pandemic, are vowing to fight Biden’s “unconstitutional” mandate every step of the way, up to and including a likely battle in the Supreme Court.

Former VP Mike Pence even came out of political hibernation to weigh in on the news, saying that “scolding” the American public was “not the American way – and I expect the response they are going to get across the country will prove that.”

Despite the Democratic Party’s incessant claims that Donald Trump was a “tyrant” and “dictator,” the raft of executive orders that Joe Biden has rammed through Washington, DC are enough to make a Caesar blush. Forcing Americans to submit to medical treatment is Biden’s personal ‘crossing the political Rubicon’ – another one of those “you’re either with us or against us” type of moments that colored the Bush-era “war on terror.”

In this latest chapter of American history, however, the unvaccinated are at risk of standing in for the likes of al-Qaeda and Islamic State. Indeed, given the level of liberal lunacy now infecting every square inch of the America cranium, the unvaccinated could become the targets of a virtue-signaling hate campaign that could easily get out of control, especially when it is considered that there are more guns in America than Americans.

Whatever the case may be, when future historians sit down to write about the America of the early 21st century and its second civil war, September 9 may go down in the history books as the day all hell broke out in earnest.