Home / WORLD / Joe Biden’s Covid-19 speech was carrots and sticks, with Americans as the proverbial donkey

Joe Biden’s Covid-19 speech was carrots and sticks, with Americans as the proverbial donkey 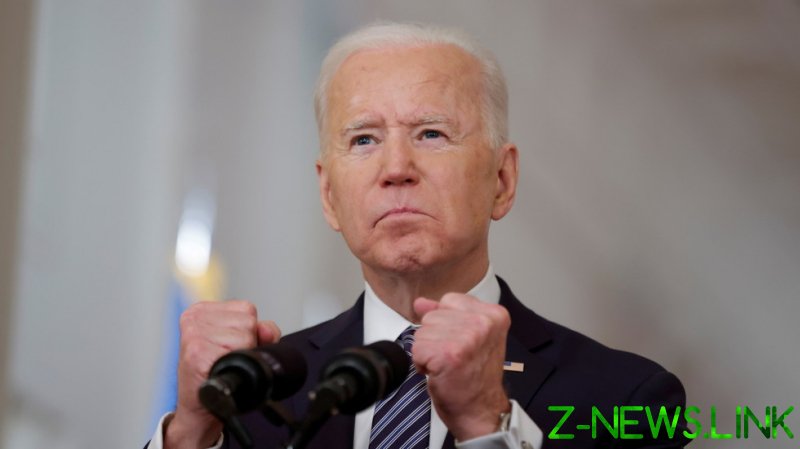 Watching Biden speak on Thursday evening was slightly surreal, as the main points of his address were already leaked to the press beforehand. Ordering all states to make every adult American eligible for the vaccine by May 1? So much for following the ‘science’, defined as obeying the Centers for Disease Control and Prevention (CDC), responsible for the current priority schedule that’s about to change by political decree.

His promise of a website that will help everyone find a vaccination location would sound a lot more, well, promising, were it not coming from the same people that gave America the Healthcare.gov fiasco.

At least Biden’s speechwriters believe in recycling, as evident by the ‘darkness and light’ theme from his convention speech, as well as the ‘man from Scranton who feels the pain of you and your family’ shtick he has become very practiced at.

There was a lot of that kind of emotional manipulation in the speech, lamenting both the “loss of life and loss of living for all of us” – meaning all the things Americans missed during the lockdowns. Notably absent, however, was who was responsible for those lockdowns. Biden waxed sorrowful about missed graduations and children set back by a year out of school… but who’s still keeping the schools closed, Joe?

To hear Biden, it was all the fault of his predecessor, looming as a shadow in the “long dark years” – yes, years, surely a Freudian slip – that are now giving way to “hope and light and better days ahead.” But there’s a catch: “if we all do our part.”

“Listen to Dr. Fauci, one of the most distinguished and trusted voices in the world,” Biden told Americans, arguing that everyone should get vaccinated because vaccines are safe and effective.

Yet it was Fauci who gave the previous administration advice on how to handle the pandemic – and then repeatedly weaseled out of any responsibility for the carnage that ensued. The media consent-manufacturing machine elevated him into some kind of science saint, to be blindly venerated by the masses.

Now Biden wants Americans to obey Fauci again, glossing over the main reason that some people might doubt the vaccines. Namely, that his allies – and even his own VP – worked to discredit them in the run-up to the 2020 election, lest Donald Trump get any credit.

Sure enough, Biden made it sound as if he was responsible for the vaccines, rather than his predecessor who cut through the red tape to make them possible in record time.

“I will tell you the truth,” Biden promised repeatedly. Well, so much for that! What Americans got instead is the carrot and the stick.

“I need you. I need every American to do their part,” Biden said, adding that if everyone behaves, “there’s a good chance” people might be allowed to gather in small groups and celebrate July 4 as Independence Day from the virus. That was the carrot.

Then came the stick. “Getting back to normal depends on national unity,” Biden said, defining unity as “what we do together as fellow Americans.” But if anyone fails to unite and conditions change, he may have to reimpose restrictions – he said, as regretfully as a crying crocodile.

Whatever happens is your fault, you see. You didn’t wear your three masks properly, and take your vaccine, and pray hard enough to Saint Fauci of the Science, and believe enough in Unity! It’s all emotional manipulation, the same kind he used during the presidential debates.

Biden’s speech was designed to make Americans feel hopeful, warm, nurtured and grateful to the government of Our Democracy that’s supposedly riding to their rescue. It’s counting on this emotional conditioning overriding any awareness of who locked them down and stripped them of their freedom, livelihoods and dignity in the first place.

Americans simply can’t be allowed to remember who weaponized the pandemic to grab unprecedented amounts of power while flouting their own rules. Or that the $1.9 trillion partisan “rescue” plan Biden just signed into law is rewarding these people with hundreds of billions in bailouts, while ordinary Americans may get a one-time check for $1,400 if they’re lucky.

Beneath this fuzzy ‘I feel your pain’ facade was the real message: Shut up, obey Fauci, wear your three masks and hope that the government may someday reward you with the carrot instead of beating you with the lockdown stick some more. After all, what are you going to do about it – vote them out?