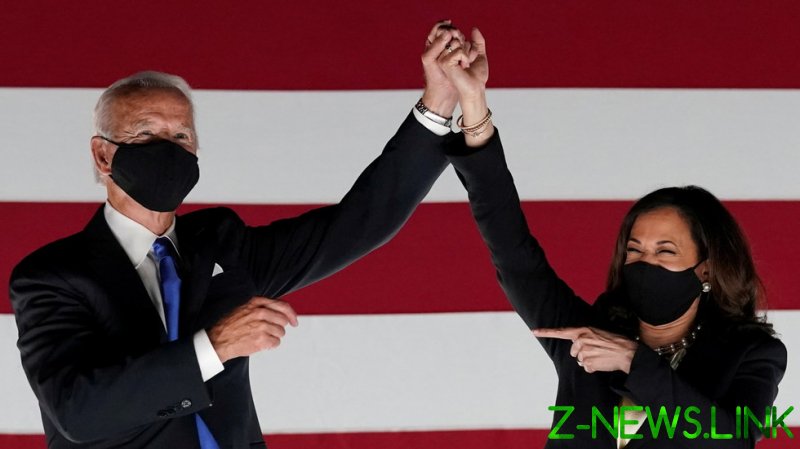 The selection seemed calculated more to twist the knife in President Trump than anything else – avowedly anti-Trump musician Bruce Springsteen was selected to deliver the news, and the addition of the “Guardians of the Year” category allowed Time to essentially hand out prizes to all of the short-listers except the president.

Corona czar Anthony Fauci, the “movement for racial justice,” and frontline health workers all got the ‘guardian’ nod – leaving Trump the odd one out.

While many celebrated the selection of Biden and Harris – putting aside how two people can constitute a ‘person of the year’ – their joy, too, was more aimed at mocking the president than a genuine appreciation of the incoming Democratic administration.

Of course, given that Biden could scarcely attract a few dozen people to a rally even before Covid-19 and Harris dropped out of the primary before a single vote was cast, the only real attraction of the pair has always been that they aren’t Trump. Even some Biden/Harris fans found the selection to be “tone-deaf.”

Biden, who reassured his wealthy donors that “nothing would fundamentally change” if he was elected, has spent the last few weeks stuffing his cabinet with holdovers from the Obama administration. Just as Obama’s own cabinet was picked and vetted by bankers from Citigroup, Biden’s crew comes with the seal of approval of Big Business.

But in the woke world of 2020, in which appearances are everything, a Biden-Harris administration can pass off an entire cabinet of lockstep neoliberals as somehow “diverse” – even though one would be hard-pressed to find any real differences of opinion on important policy matters.

Time has selected controversial figures in the past for its ‘person of the year’ – from mass murderers like Adolf Hitler and Henry Kissinger to virtue-signaling picks like Greta Thunberg or “the silence-breakers” (2017’s pick encompassing the #MeToo movement). Biden and Harris represent a safe, milquetoasty selection guaranteed to go down smoothly among the liberal intelligentsia – and they’re the only ones who count, right?