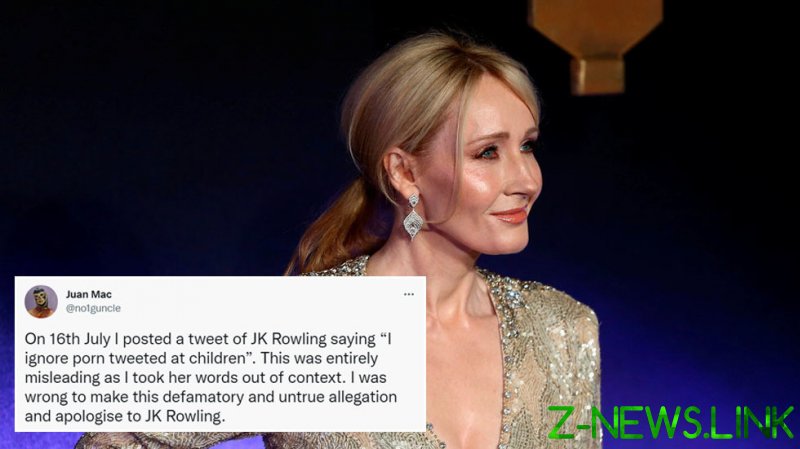 On Thursday evening, Twitter user Juan Mac apologised to Harry Potter writer JK Rowling for a “defamatory” tweet sent on July 16 which quoted an earlier post by the author.

“This was entirely misleading as I took her words out of context. I was wrong to make this defamatory and untrue allegation and apologise to JK Rowling,” Mac wrote in his online apology.

It has been alleged by many, including trans writer Dianna Anderson, that Rowling sued Mac for quoting her tweet out of context. Another writer and apparent anti-TERF warrior, Karen Geier, reinforced this allegation, “It costs about £20,000 to fight a defamation case in England and Jk Rowling targeted a queer person for screenshotting her exact words.”

One individual claimed Rowling’s defence of “transphobic free speech” was at odds with her decision to take offense with Mac, who describes himself as having “Nae Agenda But The Gay Agenda.” Another sarcastically called it a “real victory against silencing and cancel culture.”

Others said that if it wasn’t for Rowling’s legal team, they would never have heard about the now-infamous tweet which the writer had supposedly wanted to keep quiet.

Another commenter sarcastically congratulated Rowling for going from a much-loved children’s writer to a “hateful member of the 1% using her inordinate wealth to crush and silence twitter users who are of no threat to her.”

The writer is no stranger to controversy and has frequently engaged in online battles with people from the LGBTQ+ community. The author has pleaded with women not to give in to trans people and their demands to use women’s safe spaces. She was also accused of being transphobic after suggesting women should be called women, and not “people who menstruate.”