Home / WORLD / Jen Psaki is a brass-necked hypocrite. How far is Joe Biden’s official mouthpiece willing to go to protect her flailing boss?

Jen Psaki is a brass-necked hypocrite. How far is Joe Biden’s official mouthpiece willing to go to protect her flailing boss? 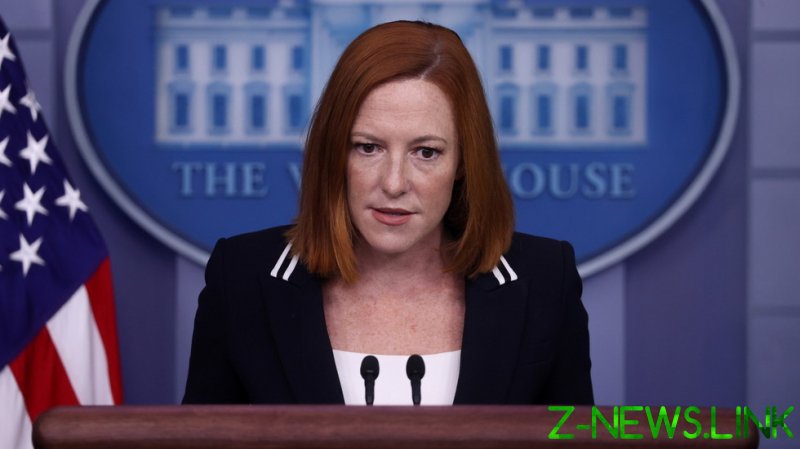 It must have something to do with all those TV lights, the undivided attention of the audience and the sheer power of being the intermediary between the President of the United States and the world’s press that turns perfectly ordinary people into power-crazed monsters prepared to say or do anything to keep mud from sticking to their employer.

Donald Trump’s turbulent presidency saw four people step up to the plate as press secretary: There was rabbit-in-the-headlights Sean ‘Spicy’ Spicer, the surprisingly stable Sarah Sanders (she lasted almost two years!), Stephanie Grisham, who managed to stay sane by never holding a briefing during her 10-month stint in the job, and, finally, the straight from Fox News central casting Floridian firebrand Kayleigh McEnany. Obviously, we must have an honourable mention for the oddball, potty-mouthed, Anthony ‘The Mooch’ Scaramucci who wowed the world for 10 wonderful days as White House Communications Director with his Goodfellas-meets-Wolf of Wall Street style performances at the pulpit.

Now the current White House Press Secretary Jen Psaki, 42, is the latest in the post to have seemingly lost their marbles. The 34th incumbent has been rightly called out for displaying rank hypocrisy in her dealings with journalists who ask questions about her boss that make her feel uncomfortable.

Two years ago, when this gamekeeper was a poacher, as a pundit on CNN, she made it clear she was all for the release of a transcript of the phone conversation between former President Donald Trump and Ukraine Ukrainian President Volodymyr Zelensky following a complaint about the call from a whistleblower in the intelligence community.

Psaki smelt blood at the time. She tweeted out enthusiastically, ‘It is not just the call transcript. The whistleblower complaint would likely have more details. We need both. And not just the call.’ The White House subsequently released the transcript but the storm eventually blew over.

Now, of course, Psaki is right in the middle of another leaked transcript, yet, strangely, her appetite for the truth seems somewhat diminished. Those pushing for the full transcripts of the private conversation between President Joe Biden and Afghanistan President Ashrafi Ghani held in the lead up to the Taliban takeover of Kabul are being fobbed off by the White House mouthpiece with a disingenuous ‘nothing to see here, people’.

But there is something to see. Biden, according to the transcripts obtained by Reuters, was pressing Ghani to lie to the world about the success of his nation’s fight against the Islamist extremists.

Biden told Ghani, ‘I need not tell you the perception around the world and in parts of Afghanistan, I believe, is that things are not going well in terms of the fight against the Taliban. And there is a need, whether it is true or not, there is a need to project a different picture.’

‘Whether it is true or not’. That sounds suspiciously like POTUS asking his counterpart to fib. Surely, Psaki should be just as outraged as the reporters asking for the truth if the president was trying to manipulate another world leader into agreeing on a false narrative.

Anyone following the situation would make the assessment that this subterfuge was being orchestrated by Biden so he could withdraw US troops as promised without it appearing he was walking away and leaving a former ally defenceless. Which is actually what happened and, as events unfolded, another 13 US lives were lost.

Kinda awkward for Biden, so lucky for him he has Psaki who deflected her inquisitors, saying ‘I’m not going to get into private diplomatic conversations or leaked transcripts of phone calls.’

What she really means is she will not demand a transcript of a damning conversation from this president because this time round, he is the guy who pays her salary. Maybe if she was just open about her change of heart then wouldnt the press leave her alone? Errr, probably not.

Anyway a brass neck in her job is a prerequisite, so the only real damage here is to the truth. So that’s okay. Isn’t it?