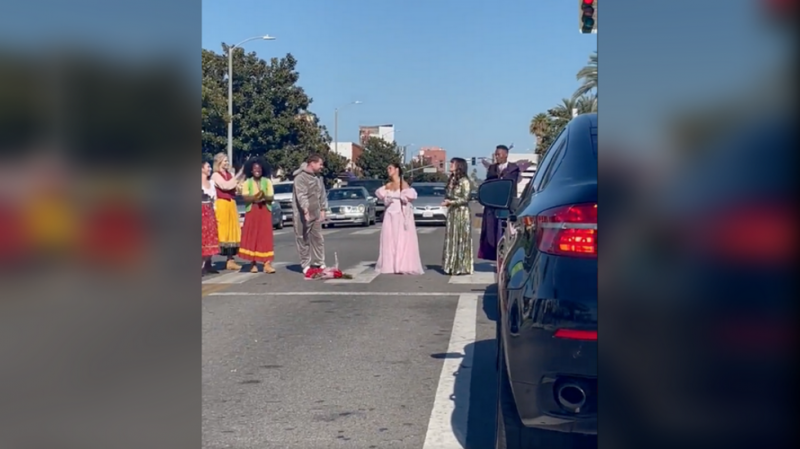 The video includes Corden dressed as a mouse and 24-year-old Camila Cabello as Cinderella dancing for a ‘Crosswalk the Musical Skit’ for an upcoming episode of ‘The Late Late Show’.

The stunt is meant to promote a new movie version of ‘Cinderella’, starring Cabello and Corden, which is set to hit Amazon Prime Video on September 3. Billy Porter and Idina Menzel also appear in the Corden video, as well as the Amazon musical.

While the street dancing was all in good fun, the most joy it seemed to kick off on social media was critics mocking the clip and these modern versions of ‘celebrities’.

“You’re attempting to drive to work after a stressful morning and this happens,” one Twitter user wrote in reaction to the odd clip, which includes Corden at one point thrusting his hips toward a driver while Jennifer Lopez’s ‘Let’s Get Loud’ plays.

“I feel like this is technically harassment,” another user wrote.

“Well now we all have to leave LA. The chance of this happening again is too great,” another added.

Some joked they would not stop for the dancing celebrities, and such galavanting by the rich in the streets could be the next “Joker origin story.”

“Los Angeles is canceled for even giving the permits for this thing,” one user wrote. Los Angeles is currently under a renewed mask mandate in response to rising Covid-19 cases. No one in the video, however, is wearing a mask, likely thanks to a filming permit.

“Not all actors are like this. I promise,” ‘Rambo’ actor Matthew Marsden tweeted.

Others accused the stunt of being “tone deaf,” considering it was put together in a city dealing with a pandemic and related government restrictions as social media and news feeds continue to be flooded with updates from the evacuation efforts in Afghanistan.