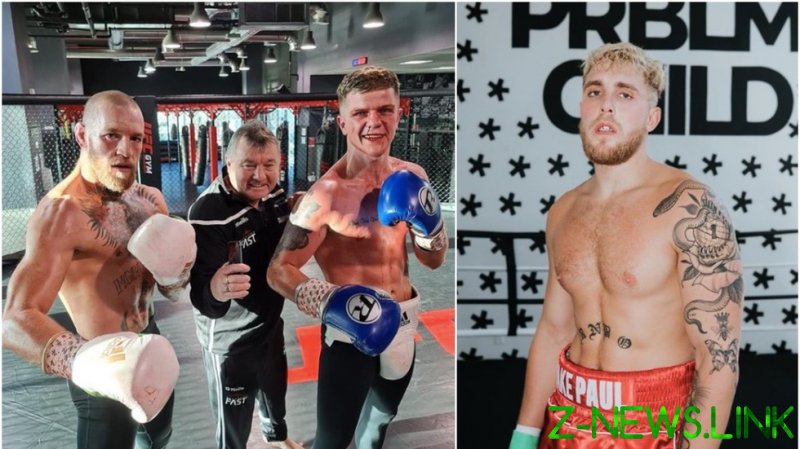 He’s went and he’s bit off more than he can chew. I’m not after Jake Paul’s money but he’s just pissed off the wrong Irish guy.

Moran, who has gone 15-1 in his professional career so far and is touted as one of Ireland’s next top fighting prospects, is currently in Dubai aiding countryman Conor McGregor with his preparations for his UFC 257 rematch with Dustin Poirier on January 23.

It was while he was sharpening The Notorious’ tools that YouTuber and 2-0 pro boxer Jake Paul decided to goad the twenty-six-year-old, by posting a video mocking Moran’s only loss, a KO in the US, causing it to go viral.

This was after ‘Problem Child’ Paul launched a scathing attack on McGregor himself, insulting his wife, Dana White, and the Irish people as a whole. Unsurprisingly, Paul’s video ruffled a few feathers, but not

Moran, who hails from Dungarvan in Southern Ireland, told RT Sport he will “rip” Paul’s head off, insisting the American must answer for his words at an arranged fight in Floyd Mayweather’s gym.

YouTuber turned boxer Jake Paul has had a go at you. You fired back, got straight to the point, cut straight to the bone in a Lambourginhi on the Dubai strip. Run us through how that came about, what stage is it at now?

I’m out here training with Conor (McGregor) and I’m delighted to be here. It was a great experience. It is a great experience and me and Conor were just doing our thing you know, Conor’s got a real fight coming up, him and Dustin Poirier is an amazing event and I can’t wait to watch it.

All while that was going on and me and Conor are training hard, a video was put up or a picture was put up of me and Conor sparring. I’m covered in blood in it. That was it, the video got good traction on the internet and I went to bed that night and I got up the next morning and my phone was literally off the hook and I didn’t know what it was about. The next thing I looked and Jake Paul has put up this video. And he has basically put me worldwide in a loss I had in America getting knocked out. That’s where it started really and it basically just took off there.

[Laughs] Idiot! It’s crazy like look. Fair play to Jake Paul and what he does and all that and he makes loads of money but stay in your own lane! You know, this fighting business isn’t something to be joked about. He’s went and he’s bit off more than he can chew. I’m not after Jake Paul’s money but he’s just pissed off the wrong Irish guy. You know, he will have to back it up. I’m busy at the moment with conor’s training camp and Conor’s fight is the most important. I just can’t wait for him to win. Him and Dustin Poirier is going to be a great event.

But after that. It’s not being left off. It’s that simple. You can’t just post a video of me all over the world and expect that that’s it, it just stops there. Nah it’s not gonna happen like that, he’s gonna have to back up what he done. He wants to pretend to be a fighter, now he’s going to have to be one. He’s pissed me off and he’s going to have to back it up, and that’s it really.

So if this fight between you and Jake Paul gets made – his brother Logan Paul has had the fight made with Floyd Mayweather so it’s not beyond the realms of possibility – how do you see that fight? How does it end?

Like I said he’s pissed off the wrong guy. He should have just left it be. And if it happens like I said I will rip Jake Paul’s head off. It’s not a boxing match, this is personal now. That’s just how it is. I don’t put in or out on anybody. I woke up that morning and there was a video of me getting knocked out. It’s gone worldwide. I’m getting messages from all over the world. It’s clear to see how hated this guy is and everyone wants to see him taught a lesson and I’m the man to do that 100%.

Have you been in touch with Floyd Mayweather at all about using his gym?

Not at all. My phone’s been off the hook the last two days to be honest. It’s hard to comprehend it all. So I’ve just been taking it easy waiting for it all to die down. But like I said – it’s not being left off. This guy is coming on the internet and he’s disrespecting fighters left right and center.

But he’s disrespecting fighters of high profile who would need a big event and would be after his money and it would take a long time and he’s disrespected me and it’s gone worldwide. I’m not no high profile guy. I’m good to go to America today and get in the ring. Do you know what I mean? So he’s going to have to back up a lot quicker what he said about me than he would with others.

He keeps going on that he’s 2-0 as a boxer. How do you rate those two fights? He’s put a lot of videos up knocking people out in sparring. What do you think of all that?

I didn’t even look at his, his fights. Being a YouTuber says enough. There’s no YouTuber going to beat me in the ring. It’s that simple. I don’t need to look at his videos. I wouldn’t look at them. Just look at the ugy! He’s a joke! You know. And like I said fair play to the guy, respect to what he does. He’s good at what he does but he makes video games, he’s not a fighter. Keep making videos. I can’t make videos so I don’t do it. You can’t fight, so don’t do it.

You said you don’t make videos. But is there a little bit of you looking to capitalize on this Jake Paul stuff and maybe if the Floyd Mayweather ‘doghouse’ video comes out you can kick on from there?

I’m just that kind of guy I’ve worked my arse off to get here. Do you know what I mean and this world that’s been created today of videos back and forward I just don’t buy into it. Had Jake Paul been living closer to me when he put that video up I would have been at his door and not doing a video in a Lambourginhi – and that’s just me as a person do you know what I mean?

I’m tied up at the moment. He’s done what he’s done. He’s going to have to back it up and I won’t be letting it slip. It’s that simple. He’s pissed off the wrong guy. You can’t do stuff like that andexpect people to just brush it off. Yes I can see the benefits of it without a doubt, but at the same time, until I make peace with it, I won’t be able to sleep at night. Like I said he’s put me all over the world getting banjoed on the internet. You can’t do that and just get away with it.

And just any final words you’d like to say to Jake Paul, to your fans, to Conor McGregor, anything in support?

Final words? Just to Jake Paul: it’s not over. I know you haven’t replied but it’s not going away. Sooner or later you’re going to see Dylan Moran.