Home / WORLD / ‘I’ve been fired for not being vaxxed, even though I have natural immunity and getting it may cause me severe medical problems’

‘I’ve been fired for not being vaxxed, even though I have natural immunity and getting it may cause me severe medical problems’ 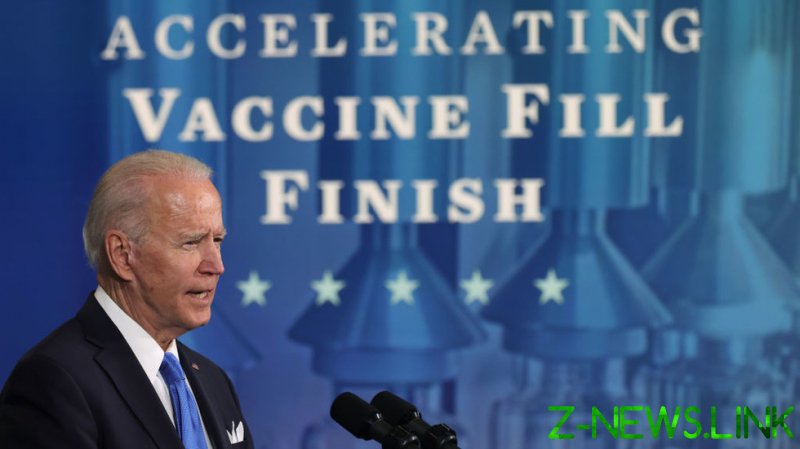 I did not expect Joe Biden to become more dangerously divisive than Donald Trump. That is a high bar for high drama. Turning health decisions into political wedges is foolish and detrimental to the nation’s well-being.

Biden promised before the election that his administration would not mandate vaccines. Now he unjustly blames the unvaccinated for causing the Delta variant to infect everyone. He intends his speeches to manipulate peer pressure across the nation in support of his vaccine mandate. Each time he does this, he sledge-hammers a wedge between the vaxxed, whom he presents as a righteous majority that cares about others, and the new pariah class he is creating out of those who refuse vaccination. Those he blames and shames for inflicting everyone with Covid with his us-and-them argument, saying: “We’ve been patient, but our patience is wearing thin, and your refusal has cost all of us.”

Hospitals were already seriously understaffed before Biden’s stigmatizing offensive, with Covid fatigue is already imperiling their ability to provide care:

Now Biden and some governors are stripping critical medical staff down even further with their vaccine mandates, while some hospitals are denuding themselves of their own volition just because of their obsession with Covid vaccines. New York state’s largest healthcare provider, Northwell Health, has fired 1,400 employees who refused to get vaccinations, while New York-Presbyterian Hospital sacked about 250 employees for the same reason.

Biden’s mandate madness is making us all less safe from Covid by cutting the skeleton crews of healthcare workers to the bone just as the months arrive when flu season will likely amplify the contagion!

Sadly, hospital workers who were lauded as heroes prior to the vaccines are now forced out with no dignity or thanks because of their decision not to vaccinate. If they were considered a great help back then when they were unvaccinated, why are they deemed now as being more hindrance than help because of their unvaccinated condition?

Biden’s jabs at unvaccinated healthcare providers become personal for me

My own daughter-in-law, a diligent surgical tech in a hospital obstetrics ward, has been shoved into the new pariah class. She’s pregnant and won’t risk her unborn baby girl on a vaccine that is now required for pregnant women. The hospital where she has worked for years is terminating her for refusing the vaccine, even though no studies have been done on the vaccine’s effects on developing fetuses.

The hospital demands she risks her baby’s development based on nothing but blind assurance all will go well. That comes in spite of concerns that the vaccine’s mRNA may cause the body to create spike-proteins – to what damaging effect in developing children no one knows.

There is some scientific support for this, which comes, in part, from a virologist who worked on these vaccines but was terminated from his university medical position for refusing the jab due to his own health concerns. While others have rejected his assertions on spike-proteins as wrong, who wants to introduce any potential risk to their unborn baby?

Naturally, my daughter-in-law won’t roll the dice on an unknown gamble like this, so she is being flushed out of her livelihood just as she adds another child to her dependents.

As a healthcare worker in obstetrics, she’s far from being an anti-vaxxer. She has vaccinated all of her children against many diseases that are more deadly than Covid, but those vaccines all underwent long-term testing. She’s not about to vaccinate her unborn daughter with something known to aggregate in ovaries and that has had no long-term testing on anyone, much less on unborn children.

I witnessed the mandate damaging the local medical establishment in another way when my wife’s top-notch doctor resigned a week ago, rather than get the vaccine. Obviously, not all medical professionals are confident of the vaccine’s safety if they’ll walk away from high-paying professional partnerships to avoid vaccination.

These are martyrs to the madness of the masses.

This week I too became a member of the new pariah caste. I chose not to vaccinate because I already had Covid (like the immunologist mentioned above, who refused the vaccine because past infection with the virus increases your risk of an overreaction). My immune response to Covid was excellent, leaving me completely trouble-free two weeks later. That left me with no need to take on any vaccine risk for the sake of calming other people’s apparently terrified minds.

The vaccinated pushers are so hysterical with fear they fired me in the belief that I am putting them and others at risk, even though they have been vaccinated and claim to believe in the vaccine. How hypocritical to their own claim is that? If the protection they believe in is true, then the only others I could put at risk are those who have also chosen not to vaccinate and, therefore, chose to take the same risk I have chosen to take! That reduces the fears of the vaccinated to nothing but mass hysteria. If some of us assess our risks as people who’ve had Covid are lower without the vaccine, while their lives are fully protected with it, why should they care? Shouldn’t that be our own choice?

Here are some more facts. My naturally enhanced immunity is scientifically proven to be greater than theirs in breadth and in longevity for protecting both against future infections and reducing my risk of hospitalization more than the vaccine reduces theirs. Several studies by major medical institutions have now demonstrated that.

I took no drugs or treatments of any kind to fight the illness, just used good nutritional support – D3, zinc and melatonin, widely known natural helpful measures. I would say 50% of the colds and flus I’ve had in the last twenty years have been worse. So, I’ll take my chances with natural immunity over experimental chances that have never had any long-term testing.

I also told my employer, Lummi Indian Business Council in Bellingham, Washington state, that I chose not to vaccinate because I have a major health condition that gives me more than a 30% likelihood of a major setback from the vaccine. This summer a survey of thousands of people with my condition revealed 27-36% (depending on the vaccine used) of those surveyed suffered “major setbacks” from Covid vaccines.

The CDC allows immunocompromised people to receive exemptions, and my immune-compromising condition was diagnosed and treated for years by one of the nation’s leading experts in that condition at Harborview Medical Center in Seattle. Because I was part of a government-funded research program, my diagnosis had to be rock solid in order to preserve the integrity of the research.

Though I presented all that evidence, I was terminated for saying, “Because I’ve had Covid, I don’t need this experimental vaccine that has had no long-term testing, and I actually have strong reason to believe it could cause a serious setback in my underlying health condition, so I need you to accommodate that medical need.”

Joining the chorus of unsung heroes

I suppose, since I have a Class-A commercial driver’s license, I can always change careers to driving a truck for a small company that is not under these mandates… until Biden or my governor close that door, too. If I elect to do that, I’ll be helping the economy through one of its biggest problems right now – supply shortages due in large part to a lack of truck drivers (which Biden’s mandates will make worse).

That should make me an unvaccinated hero for getting the things people need to them, but I won’t hold my breath for that praise, even if I wind up delivering medical supplies. Neither will I capitulate to the maddening masses who fear my dust-of-the-earth immunity, even as they argue they are fully protected from me by their high-tech vaccines while using majority power to stipulate that I must conform to the protection they have so they can feel safe again!

If you’re a truck driver who delivers medical supplies who is terminated for refusing a vaccine, expect the vaccinated to become angry when their medical supplies are not making it through. You are lepers. You are pariahs – the great unwashed.

Don’t expect Biden’s bashers to praise you if your preference for retaining health diversity via natural immunity leaves you in the healthy minority down the road who must carry a drug-devastated society along. When they fire you over the vaccine this fall, the lack of food on their tables this winter will become your fault, too. If you had just submitted to the vaccine, you could have delivered their sustenance.

Tags being fired getting immunity natural though vaxxed