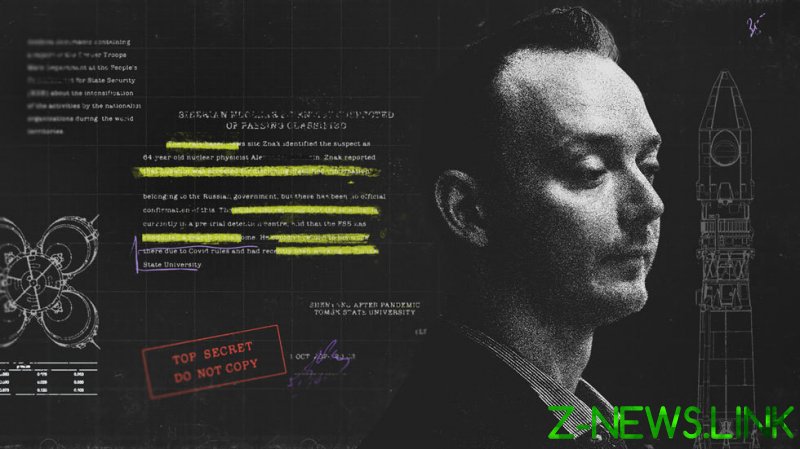 That changed dramatically in July last year, when he was arrested by agents from the FSB, the country’s top domestic security agency, and charged with treason. In a statement, officials said that he was suspected of passing state secrets to spooks from a NATO nation. On Tuesday last, a Moscow court extended his arrest, meaning he will languish behind bars until at least May, while prosecutors prepare the case against him.

Safronov’s lawyer, Ivan Pavlov, revealed after his arrest that, in files shared by investigators, “the Czech Republic is the state that is mentioned as receiving classified information,” allegedly transferred over the internet. “Prosecutors believe that the US has become the ultimate recipient,” the advocate added. His client continues to maintain his innocence.

Since then, the substance of the allegations has been shrouded in secrecy. For months, it has been unclear even to those close to the case whether the charges relate to Safronov’s work with Roscosmos, or to his time as a journalist writing on military and space matters for Russian daily business newspapers Kommersant and Vedomosti.

Safronov’s legal team has maintained that the focus of the investigation has been on his activities as a reporter, rather than space program data that he may have had access to in his more-recent role as an advisor to Roscosmos’ Director General Dmitry Rogozin. Instead, Pavlov has said, the case concerns the transfer of technical military information on the supply of Russian weapons to the Middle East and Africa, allegedly for use by mercenaries.

However, this version of events hasn’t always been shared by the authorities and, at a Human Rights Council meeting in December, President Vladimir Putin sparked a media frenzy when he claimed that the reporter had been “convicted” of offenses unrelated to his journalistic career. Kremlin Press Secretary Dmitry Peskov later rowed back on the wording, saying Putin “misspoke”, given the case is still ongoing. Roscosmos has also insisted that the charges relate to events before Safronov joined the agency in 2017.

These clarifications have failed to shake off the speculation that someone at the heart of Russia’s space agency could have been handing over confidential dossiers to Western nations. It also wouldn’t be the first espionage scandal to have hit Roscosmos, which has seen a number of arrests and probes in recent years.

In 2018, the FSB raided two institutions with close links to the space program: the Central Scientific Research Institute of Mechanical Engineering and the Research and Analytical Center of the United Rocket and Space Corporation. Reports at the time claimed they were investigating a data leak through which hostile powers were said to have become aware of developments in Russia’s ‘Top Secret’ hypersonic technology capabilities.

Viktor Kudryavtsev, a Roscosmos scientist, was later arrested on charges of passing classified data on two military missiles, named Kinzhal and Avangard, to a Belgian research group with links to NATO. One of his colleagues, Roman Kovalyov, a former official at the Central Scientific Research Institute of Mechanical Engineering, was arrested the following year and handed a seven-year prison sentence after making a deal with prosecutors.

Safronov’s personal history lends itself to Cold War intrigue. His father, also named Ivan, was a celebrated journalist and defense writer, also working for Kommersant. He had garnered a reputation for exposés on perceived shortcomings within the Russian military, such as reported launch failures of ballistic missiles, and was allegedly embroiled in a row over reporting on a weapons deal between Moscow and Syria.

Then, in 2007, the elder Safronov died after plunging from a window of his residential building in the Russian capital. The speculation he was involved in a shadowy plot grew when it emerged he had fallen from a stairwell window, rather than his apartment. He had just returned from the supermarket and, according to Kommersant, oranges that he had just bought were scattered across the landing.

The coroner recorded a verdict of suicide, and noted reports he had been contending with worsening health problems, including a peptic ulcer. However, one colleague, then-Kommersant editor Andrey Vassilyev, told Western media that “I have known him for 10 years and this [suicide] is absolutely not in his character. Everything was fine with him.”

The sky’s the limit

The parallels between father and son have fuelled speculation about the FSB’s investigation of the younger Safronov, leading some to fear a political prosecution. More than 150 people from the media industry, including the editors of a large number of news outlets, have openly called for his release. For their part though, authorities have denied there is any conspiracy at play, and Putin has insisted that any suggestion that the charges had been invented was “bullshit.”

However, he again doubled down on claims that no point in Safronov’s career wasn’t under investigation. “His activities, which the investigation considers illegal, are not connected with his work as a journalist at Kommersant,” the President said, “but with a rather long period of his life, including when he worked as Rogozin’s assistant [at Roscosmos].”

Despite that, on Tuesday, Putin’s spokesman told reporters that the Kremlin is not closely following all the details of the case. “We are talking about procedural actions, and of course, they cannot be reported to the president,” Peskov said, “otherwise he would not have enough time in the day.” The FSB, he said, was overseeing the case, “but I repeat once again, we have no opportunity and no desire to interfere in this.”

Finally though, on Tuesday, Pavlov said Safronov’s legal team were convinced that the charges were solely related to his reporting. “Ivan is absolutely, definitely sure – there are no more assumptions required – that he is accused of normal journalistic activities,” the lawyer added.

The row comes at a tense time for Rogozin’s leadership of Roscosmos. At the start of the year, he told Putin that the agency was planning an ambitious 29 rocket launches this year, an increase on the previous period.

It is no secret that Russia holds up space exploration as a key strategic priority, given the Soviet legacy in the field, and Putin has backed lofty ambitions to send a mission to fiery Venus.

However, the space agency receives only around a tenth of the funding that its historical rival NASA gets, leaving it with a financial black hole. However, it is worth noting that, taking into account purchasing power parity, the gap is not as wide when adjusted for the relative cost bases of the two organisations.

In November, Rogozin announced that its management faced a 15-20 percent salary cut and around a hundred staff had been laid off. All available budget resources, he argued, should be spent on scientific and technical work to meet the ambitious goals being set for the agency.

If Safronov is ultimately convicted of spying for NATO, at a time when tensions between the bloc and Moscow are rising ever higher, it will raise many questions about espionage and the role of journalists. However, if those purported data leaks relate in any way to his time at Roscosmos, it will likely be yet another headache for Rogozin and everyone else in his orbit.