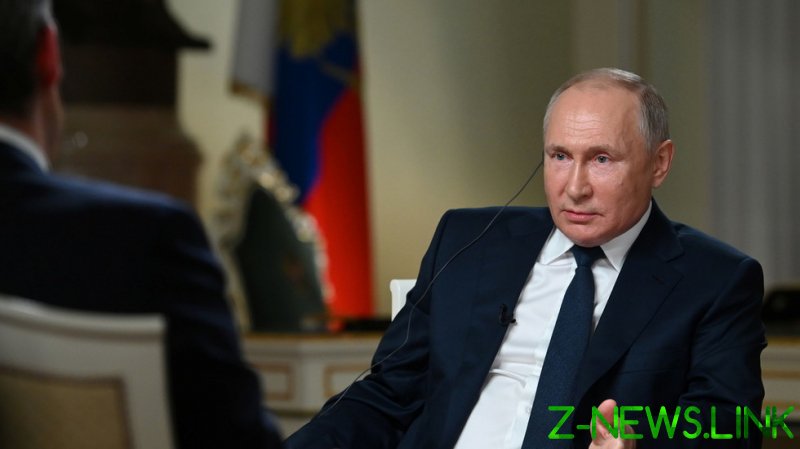 He added that recent court rulings against Navalny’s organization and the decision to list two overseas-backed media outlets, Meduza and VTimes, as ‘foreign agents’ were not part of a pattern of repression, arguing that the US had equivalent measures. “I believe that it’s justified,” he said.

However, the back and forth between Putin and the interviewer quickly descended into a heated argument, with Simmons attempting to interrupt and challenge the president’s words. “Do you want me to keep answering?” Putin asked, raging that Simmons was “not liking my answer, so you’re interrupting me. This is inappropriate.”

After the NBC correspondent said the leader was engaging in “whataboutism” by referencing the US in his response to questions about Russia’s domestic situation, a frustrated Putin said. “If you muster patience and let me finish saying what I mean to say, everything will be clear to you. But you’re not liking my answer. You don’t want my answer to be heard by your audience. That’s the problem. You’re shutting me down. Is that free expression? Is that free expression the American way?”

Simmons went on to ask Putin directly whether he had ordered what he claimed was the state-sponsored attempted murder of Navalny. The opposition figure and his German doctors said he was poisoned with the nerve agent Novichok. “Of course not,” Putin said. “We don’t have this kind of habit of assassinating anybody.”

In reply, Putin asked whether the US had ordered “the assassination of the woman who walked into the Congress and who was shot and killed by a policeman,” adding, “Do you know that 450 individuals were arrested after entering the Congress? And they didn’t go there to steal a laptop. They came with political demands.”

On Wednesday, Putin is set to meet with his American counterpart, President Joe Biden, for their first in-person summit since the Democratic Party politician took office. Russian Foreign Minister Sergey Lavrov has hinted that his side intends to raise the subject of the supporters of former US President Donald Trump, who stormed Washington’s Capitol building in the wake of his defeat during the 2020 election. “A lot of really interesting things are happening from the point of view of the rights of the opposition, and protecting those rights,” the envoy added.