Home / WORLD / ‘It’s like the Twilight Zone’: Times Square set to be empty for New Year, with crowds BANNED for first time in over a century

‘It’s like the Twilight Zone’: Times Square set to be empty for New Year, with crowds BANNED for first time in over a century 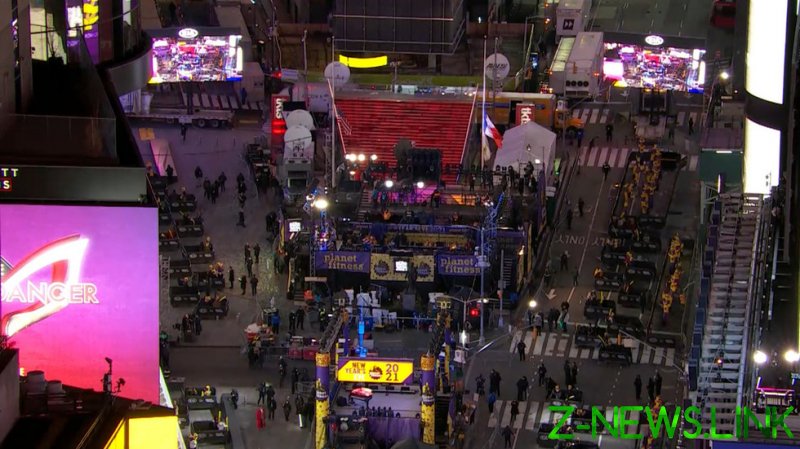 A first in the 116-year history of the traditional ‘ball drop,’ Times Square will be closed to spectators as the city rings in the New Year, an event that’s previously drawn crowds in excess of 1 million. Instead, revelers will have to watch the show from afar via live broadcast, in what the Times Square Alliance, the organizer behind the annual New Year’s bash, said would be a “virtually enhanced, visually compelling” but “very different” celebration compared to years past.

City authorities have been adamant that the typically jam-packed gathering is off the table as the coronavirus pandemic drags into 2021. During a Wednesday press conference, NYPD Chief Terence Monahan was emphatic that residents and tourists must keep away from the venue.

“My message to those ringing in the New Year please stay at home,” Monahan said. “There are absolutely no spectators allowed in Times Square. There are no public fireworks in Coney Island and there is no midnight run in Central Park.”

Though the square will prohibit visitors, the streets won’t be entirely vacant, with a number of live performances scheduled for broadcast on TV, headlined by R&B singer Andra Day and featuring artists Jennifer Lopez, Pitbull and Machine Gun Kelly, among others.

In addition to the musical acts, the Times Square Alliance will also host a small number of guests for a socially-distanced “Heroes of 2020” event, inviting 39 individuals who represent “a sampling of first responders, frontline workers, researchers, artists and activists who sacrificed in 2020 to provide care and support for their communities.”

A once-in-a-century occurrence, the ban on crowds was met with disappointment by many, as netizens shared photos of a desolate Times Square on Thursday evening, some deeming the sight “surreal” and “like something out of an episode of ‘The Twilight Zone.’”

Others took the hit in stride, poking fun at the otherwise gloomy situation. One commenter suggested the square’s live audience ought to be replaced with “cardboard cutouts,” apparently taking inspiration from the “cardboard fans” employed by sports leagues in the US and beyond.

New Year’s gatherings at Times Square stretch back more than 100 years, to the early 20th century. Though the square has drawn crowds and fireworks since as early as 1904, the famous ‘ball drop’ didn’t begin until several years later, in 1907. The event has continued annually ever since, enduring calamities ranging from both World Wars to the 1918 Spanish Flu outbreak – though some years have been more subdued than others.

While the square will be virtually unoccupied as the clock strikes midnight and brings an eagerly awaited end to 2020, viewers can still tune into the festivities and performances through a livestream hosted by the Times Square Alliance.