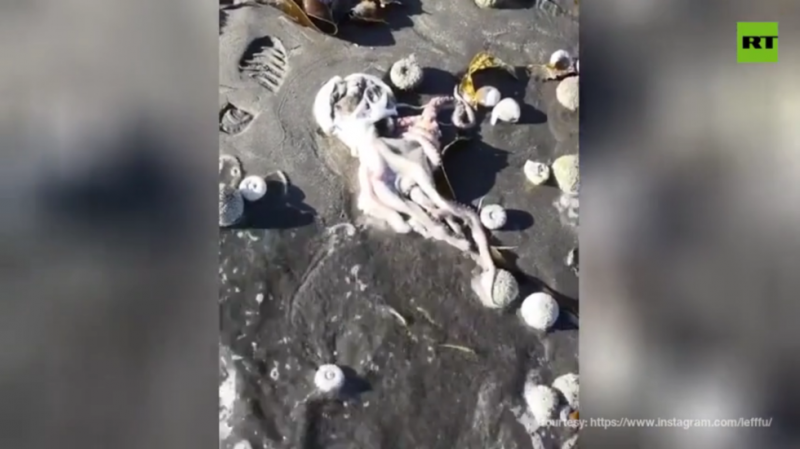 The first signs that something was wrong at the picturesque Khalaktyr beach, a popular tourist and surfing spot, became apparent when people started to develop symptoms after taking a dive in the ocean. “For weeks now, all surfers have been experiencing eye problems after coming back from the water,” Yekaterina Dyba, an administrator at a local surfer school, wrote on social media. She added that the swimmers felt “a decrease in vision,” as well as fever, nausea, and sore throat.

Many shared similar stories. “I had the same problems with my eyes. Yesterday I was diagnosed with a first-degree corneal burn. Eye drops and ointments were prescribed, and I felt better [afterwards],” one local wrote online.

Several days later, shocked beach-goers discovered that scores of octopuses, crabs, starfish, sponges, sea urchins, and other marine animals had washed up ashore. “It’s like a graveyard here,” one person was heard saying as he filmed a thick layer of carcasses covering the sand.

Greenpeace declared the situation an “environmental disaster.” Meanwhile, authorities determined that the concentration of petroleum products in the water was 3.6 times higher than normal, and the amount of phenol was 2.5 times higher.

Top regional environment official Alexey Kumarkov told the media that the cause of the mass death of animals is yet to be determined – whether pollution is to blame and not just a powerful storm.

A task force was set up to tackle the situation, and a criminal probe was launched. Officials have not yet determined the exact cause of pollution. Kamchatka’s Environment Ministry said that ships passing through the local bay may be at fault, or even “underwater objects,” such as a Chinese cargo vessel that sank in 2011.

The beach is located not far from the Radygino military training ground, and occasionally gets partially closed down due to naval drills taking place in the area. However, Russia’s Pacific Fleet denied any ties with the disaster. A spokesperson said that “starting from June, there were no exercises using heavy equipment” on Radygino, as well as no naval drills involving ships in the bay adjacent to the polluted beach.