Home / WORLD / It’s Greta Thunberg who seems to be at the helm in Germany. But that just signifies utopian promises, not REAL green progress

It’s Greta Thunberg who seems to be at the helm in Germany. But that just signifies utopian promises, not REAL green progress 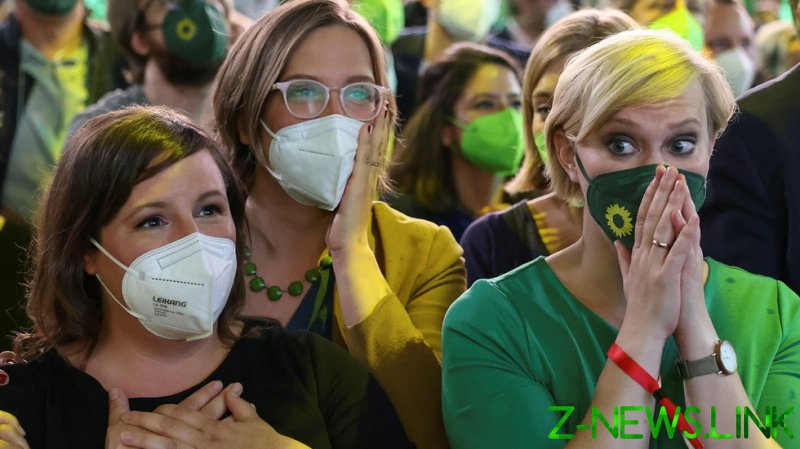 The true leader of Germany – and, it seems, of many other European nations – might be said to be young Greta Thunberg, who angrily scolds the frightened Eurocrats from her various ‘concerned’ media pulpits. See them scatter like frightened mice before her, their ties and pantsuits fluttering.

The recent elections in Germany have proven that environmental, or green, activism is on the rise. This might be largely because it’s the only kind of oppositional social activism permitted or recognised by the Western media machine, where protesters won’t find themselves persecuted by the ever-scrutinizing surveillance-state apparatus. And, of course, that alone proves it’s no threat to the capitalist, industrial-distribution system.

But what exactly is the make-up of these European eco-parties? Why are they often called ‘watermelons’ – green on the outside and red within? Certainly, what you often see at green-party gatherings are flags and slogans unrelated to supposed ‘green goals’, but related instead to progressive social justice.

The media cheered on two election candidates standing for Germany’s Alliance 90/The Greens for ‘making history’ by becoming the first transgender women to win seats in parliament.  But what exactly does transgenderism have to do with the environment? Why are rainbow and EU flags front and centre in the Greens’ photo ops?

In the same vein, how does supporting an issue such as open borders factor into their thinking? Shouldn’t they rather be concerned with overpopulation? How can, say, outgoing Chancellor Angela Merkel’s nefarious open-door policy, which brought in millions of migrants and will no doubt continue to bring in millions more, mean anything but more people living at Western over-consumption levels, more green spaces lost to urban sprawl, more forests and carbon sinks destroyed? It’s not hard to see that these progressive variances are oppositional values.

The only credit I will give the German Greens – as in the only strong sign of commitment to the environmental cause that I actually see in their platform – is their opposition to nuclear power, which strikes me as sincere. What they’re attempting to defend is difficult because it’s not system-approved.

Overall, what the rag-tag and contradictory grab bag of progressive causes indicates to me is that these are not serious or devoted eco-thinkers or activists at all, but people who get caught up in the causes of woke journalism. They’re activated into partaking in system-approved social justice grievances of all kinds as an assertion of modern identity, but they’re often not serious about them in either a scientific or political sense.

In their own mind, they’re crusaders for ‘good’ in all its forms, and in the Western mainstream-media-gaslit context, that means carbon goals, rainbow flags, and now and then, a bit of BLM. Having a thorough understanding of these problems, or their solutions, is not necessarily a requirement, nor does one of these causes supersede the other. They’re embracing an identity: being progressive and part of the cult of do-gooding, the values of which are almost entirely predicated on spoon-fed opinion and the tenets of the Thunberg coffee-table book.

There is nothing resembling the grim rationality of ecologist Kaarlo Pentti Linkola or a serious critique of the industrialized system itself – the true culprit – which one might find among the controversial writings of ‘Unabomber’ Ted Kaczynski, or even writer and philosopher John Ruskin or historian Henry Adams. The modern greens appear to espouse instead a kind of limp-wristed approach to tackling climate change through the likes of carbon taxes and the proliferation of electric cars, alongside other ineffective or contradictory pet projects.

Electric cars come with their own entire laundry list of environmental problems, and carbon-taxing corporations in Germany will do virtually nothing to remediate the alleged causes of climate change worldwide.

While the new greens share Merkel’s belief in ‘no borders’ for people, they seem to believe there are borders for greenhouse gas. They don’t wish to challenge anyone where it hurts, which is in the convenience. They rarely seem to address the fossil-fuel traffic of the worldwide distribution system – an ever-moving caravan of supertankers and trucks. They are innately globalist, not localist: they somehow believe global egalitarianism is synonymous with the preservation of nature.

At no point do German or other popular green-party politicians seem to consider, for instance, functional pre-industrial solutions that were once common across all of Europe. It seems an impossibility now to even consider that the continent once had huge and powerful sea-faring empires, massive and beautiful cities, clean water, drainage and sewage systems, all without burning a drop of fossil fuel. There are not only already home-grown, sustainable, and natural solutions to many of these problems, but those solutions are drawn from millennia-long inherited knowledge that, until the mid-20th century, was simply considered ‘tradition’. Traditions in farming, livestock, foresting, building, transport and urbanism that developed over centuries, before being swept away in favour of industrial mechanisation, seas of poured cement, and the Ford assembly line.

In reality, there is no serious addressing of environmental issues without suggesting a managed repeal of certain industrial conveniences, and a return to the faded idealism of self-sufficiency, outdoorism, walkable cities, unfertilised-soil renewal, and the man-made over the mass-made. A rejection of the urban rat race in favour of a slower pace that rewards individual labour over machine speed. Not a de-industrialisation across the board, but a realistic limiting of consumerist industrialism, with its endless profits for middleman distributors, fast food, plastics, out-of-season produce, and other unnecessary modern ‘product options’. A better system would involve a hierarchy of industrial necessity, and a rejection of the materialist supremacy of the American corporation, with its time-clock values of labour.

Any political party that predicates itself on tackling the problems of industrial pollution cannot realistically do so while maintaining the utopian promises of an unchanging present. An ‘adult’ environmentalism needs a re-evaluation and a revival of certain of our lost, human-scale traditions – certainly when it comes to food and travel. Not to return to the Bronze Age, abandoning technology itself, but to reclaim a selective ethic of localised self-sufficiency, toughness and community spirit. In short, a return to decidedly un-progressive values.