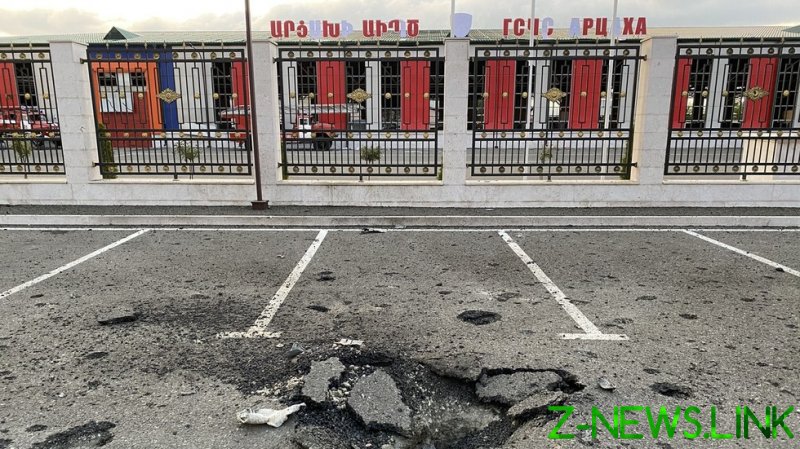 The shells and rockets fired by the Azerbaijani artillery that used to explode on the outskirts of the city known as Stepanakert to its ethnic Armenian residents and officially called Khankendi by Baku are now rocking the very city center and hitting residential areas even at night.

A military hospital and two apartment buildings were damaged in the latest Azerbaijani shelling launched at the city after dusk. An RT crew at the scene has taken photos of damaged cars, smashed-out windows and an apartment block slightly damaged in the attack.

A witness also told RT’s Igor Zhdanov that the Azerbaijani military used drones in an airstrike on the military hospital.

Earlier, the crew also witnessed destruction wreaked by another Azerbaijani shelling to the Emergencies Ministry of the self-proclaimed Nagorno-Karabakh Republic seeking independence from Azerbaijan. Although the extensive building complex survived the barrage of shells and 250mm rockets, it was still damaged beyond repair.

“It was obliterated. Everything is gone,” Zhdanov said looking at the massive holes the projectiles made in the building’s walls and giant shell craters covering a nearby square.

The local fighters told RT that the Azerbaijani military sometimes employ so-called double tap tactics, hitting the same areas twice as they target the soldiers that come to the area to clear it following the first shelling.

The region disputed by Yerevan and Baku for decades has found itself at the center of an intense military standoff after violence broke out between the two neighbors last Sunday. Armenia and Azerbaijan accuse each other of targeting civilians as dozens of both military and civilian casualties have been reported by both sides.

Watch RT’s full report to learn more about how the escalating armed conflict has affected the region at the center of the fighting.