Home / WORLD / ‘It’s embarrassing’: Feuding teammates in ‘budget version of Zidane vs. Materazzi’ as player is sent off for ‘headbutt’ (VIDEO)

‘It’s embarrassing’: Feuding teammates in ‘budget version of Zidane vs. Materazzi’ as player is sent off for ‘headbutt’ (VIDEO) 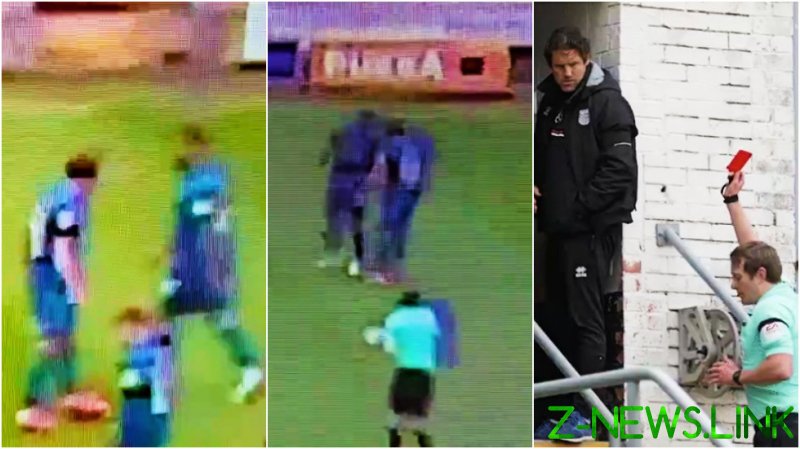 League Two side Grimsby Town are bottom of the entire English Football League and battling to stay in the fourth tier, although they entered their match away at Bradford City in good form following an eight-match unbeaten run.

Their task became significantly harder after forward Payne and winger Morais were spotted arguing as they left the pitch at the end of the first half, leading to a physical clash and a subsequent red card for the despairing Payne, awarded to him by referee James Bell while he was standing on a flight of stairs at the entrance to a rundown-looking locker room.

“Super cheap budget version of Zidane and Materazzi,” mocked one fan, referring to the famously violent headbutt with which the France legend disgraced himself in an immortal moment during the final minutes of the 2006 World Cup final.

Others questioned whether the incident, which did not seem to involve significant force, was worthy of the drama that quickly surrounded it, and drew comparisons to the scrap between Lee Bowyer and Kieron Dyer at Newcastle in 2005, which resulted in a red card for both players and a police charge for Bowyer.

“Violent conduct, which head butting or attempting to head but is defined in the laws of the games is defined as, is a dismissal,” explained one viewer, before unsympathetically adding: “The player ought to get an extended ban for absolute stupidity.”

Grimsby’s 1-0 defeat left them seven points from safety with only six matches left to play, and manager Paul Hurst was aghast at his own players sabotaging his efforts to orchestrate an unlikely-looking escape.

“I’m angry,” the coach admitted afterwards. “Stef might be the one that’s done it, but the pair of them have let the club down, and everyone connected to us.

“I turned away, saw that they were having a little disagreement, which is normal, but it obviously went a lot further than that.

“Your mind is then – very quickly – trying to contemplate what to do next in terms of the shape, the team, and how we try and get back in the game.

“They basically let everyone down, and quite frankly it’s embarrassing. It’ll be dealt with. That’s all I can say.”

Former Premier League striker Clinton Morrison felt that the fight would have carried on off the pitch.

“Filipe Morais got taken off at half-time, so that goes to tell me it must have continued in the locker room afterwards, definitely,” he told Quest.

“He would have stayed on, because he’s an important player, so that continued. That should never happen – it’s not good.

“It can get heated on the pitch but, with the position they’re in, they need all their players on the pitch.

“You need 11 men. Both players will learn from it and they’ll have to move on.”