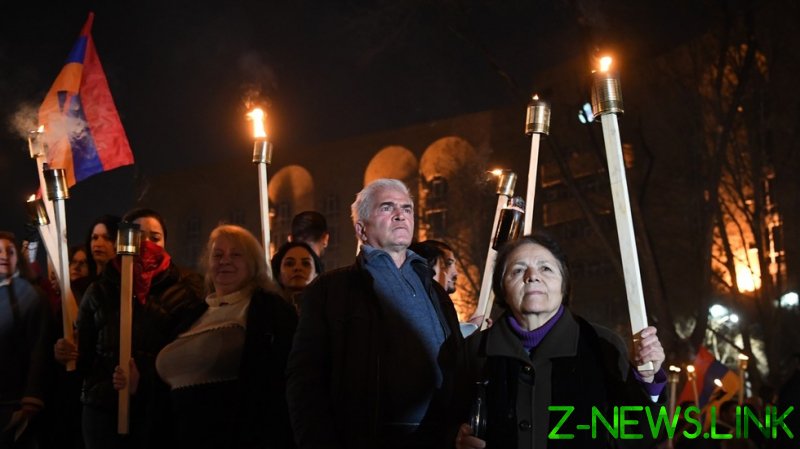 In an article by journalist Anna Nemtsova published on Friday, New York-based outlet The Daily Beast claimed that “Putin may have triggered an attempted coup in Armenia” because of a public spat over the effectiveness of the Russian-made Iskander missile systems. The Caucasian country’s Prime Minister Nikol Pashinyan warned on Friday that the country’s army was planning to oust him after its top generals signed a joint statement calling for his resignation.

Pressure had escalated on the embattled leader after he requested the dismissal of a top military chief, Tiran Khachatryan, when the general contradicted his criticism of the Moscow-made rockets. Pashinyan had told journalists that the Iskander missiles had failed during bloody fighting with neighboring Azerbaijan, or had “exploded only by 10 percent.”

“This is impossible,” Khachatryan then told journalists. “Sorry, but this isn’t serious.”

Russia has also denounced the claims about the rocket system, which Pashinyan suggested was a “weapon of the 1980s.” Viktor Zavarzin, the deputy chairman of a committee on defense and security in parliament in Moscow, hit back, arguing that “the Iskander is a highly precise weapon, which has repeatedly been proved during military exercises.” Pashinyan’s insinuations, he argued, are “a complete lie.”

On Monday, after a call between the Armenian prime minister and Putin, Pashinyan’s government issued a statement saying that he had been misinformed about the Iskander. “There is no doubt that Russian weapons are one of the best in the world,” the press release added.

Political analyst Artur Paronyan claimed that, in a call earlier that week, the Russian Army’s General Staff Chief Valery Gerasimov told his Armenian counterpart Onik Gasparyan that the military should move against the prime minister.

The Daily Beast also reported comments from one of the prime minister’s strongest critics, former Armenian Defense Minister Vazgen Manukyan, who said that “we blame Pashinyan for the total diplomatic failure in peace negotiations with Baku and for our defeat in the war against Azerbaijan’s aggression.” It alleged that he and his supporters had support “from Russia’s military” to challenge the prime minister and force him out of office.

The site later issued a retraction, correcting the record to clarify that Manukyan had claimed that his support came from Armenia’s military, rather than from Putin’s. The distortion came, editors, said, from a “reporting error.” However, even with a central piece of evidence now missing, the article on the Russian president’s potential involvement has stayed up. Yahoo News also picked up on the provocative claims, reprinting the allegations almost verbatim.

For its part, the Kremlin has publicly said that cooler heads must prevail in the conflict. Speaking to journalists last week, Putin’s spokesman Dmitry Peskov said that Russian officials were “observing with concern the development of the situation in Armenia.” Describing it as an internal matter for a “very important and close ally in the Caucasus,” he “urged everyone to stay calm.” As for Pashinyan’s criticisms of the Iskander missile system, he said “we leave it without comment. Russian equipment has repeatedly demonstrated its effectiveness in a variety of situations.”

However, Kremlin analyst and RT contributor Sergei Markov also told The Daily Beast that “Putin considers Pashinyan a traitor and an enemy who failed in his promises many times.” The Armenian prime minister has come under harsh criticism at home for signing a Moscow-brokered ceasefire that paused fighting in the disputed region of Nagorno-Karabakh but handed over swaths of Armenia-controlled territory to Azerbaijan.