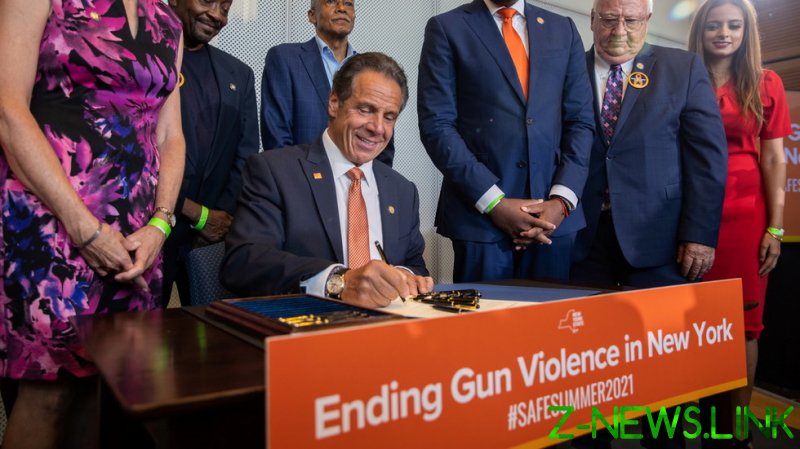 In an executive order made public on Tuesday, Cuomo declared a “disaster emergency on gun violence” that will allow his office to dedicate attention and resources to the crisis.

He also announced that he signed into law a bill, passed by the majority-Democrat state legislature, that would make it possible to sue gun manufacturers in the state under the “public nuisance” standard.

The move was quickly applauded by the Brady Campaign, a gun control group, which called the New York law the “first of its kind” and implied it’s an example other US states should follow.

New York already has some of the most restrictive gun laws in the US, but Cuomo channeled Chicago Mayor Lori Lightfoot – a fellow Democrat – to claim the problem lies with other states with “weak gun laws.” According to Cuomo, 74% of guns used in crimes in New York state come from elsewhere.

While some New Yorkers responded to Cuomo’s declaration with approval, others were more critical. More than a few pointed out that the state seems to be “forever” stuck in one state of emergency or another, with the coronavirus emergency expiring on June 24.

“You should write a book about it,” was another hot take, referring to Cuomo’s self-serving memoir about ‘leadership’ in times of Covid-19. The governor has been blamed for more than 15,000 deaths in nursing homes, which he ordered to accept the infected. Meanwhile, a dozen or so women have accused Cuomo of sexual harassment, which he has denied.

Others suggested that a crackdown under this new emergency would make progressive New Yorkers nostalgic for the ‘Stop and Frisk’ anti-crime policies they denounced as racist and campaigned to end.

Another persistent argument was that the rising level of crime was directly related to bail reform and other criminal justice crusades pursued by Cuomo and the Democrats over the past several years.

The New York Post has already raised alarm about Alvin Bragg, who appears to have won the Democrat primary to become the new Manhattan district attorney. Bragg has proposed “de-prosecuting” offenses such as resisting arrest, trespassing, driving with a suspended license and any traffic violations, and advocates “non-incarceration” for every case except homicide, violent assaults or felony sex offenses.

While overall crime in New York City appears to be slightly down compared to 2020, according to police, the number of shootings, hate crimes, rapes and other sex crimes has increased drastically.