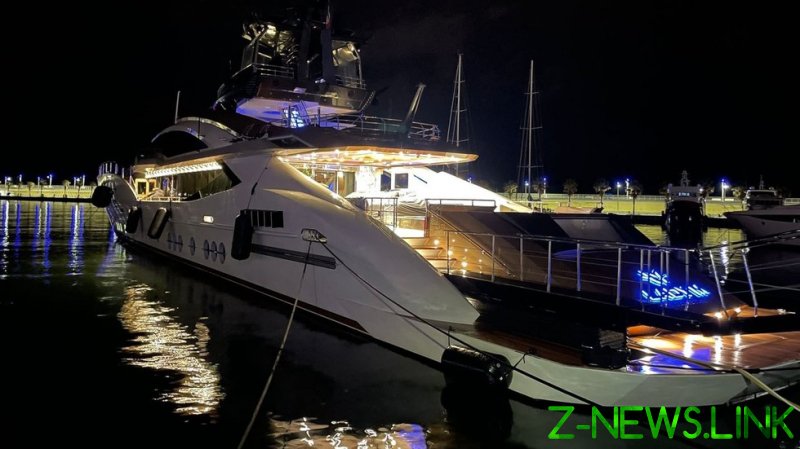 Italian authorities have seized a massive yacht owned by Russian metals magnate Alexey Mordashov in a bid to enforce the European Union’s penalties on Moscow, the prime minister’s office said, amid additional reports that a second craft was captured by police under the same sanctions.

A spokesperson for Italian PM Mario Draghi announced the move on Friday night, disclosing the value of the yacht while stating it was taken near the coastal town of Imperia in the country’s northwestern extremity.

Footage purporting to show the police operation in action has been published by local media, showing an illuminated ‘Lady M’ surrounded by officers and law enforcement vessels.

Mordashov is the main shareholder of the Severstal steel and mining giant, which holds billions in assets and, according to the company, delivers some 2.5 million tons of steel to Europe each year. He was placed on Brussels’ sanctions blacklist over alleged ties to the Kremlin, which last week launched an invasion into Ukraine on behalf of two break-away republics in the Donbass region.

However, the steel tycoon insisted in a statement earlier this week insisting that he had no role in the decision to attack Ukraine and that he is baffled by the penalties.

“I have absolutely nothing to do with the current geopolitical tensions and I don’t understand why the EU has imposed sanctions on me,” he said, adding “I have never been close to politics.”

While the new European sanctions have targeted what Western officials call Russian “elites” and “oligarchs,” in some cases the individuals’ links to the Russian government have not been made clear. Nonetheless, some 500 Russian citizens and entities have had their assets frozen under the penalties, according to AFP.

Later on Friday, local Italian media reports suggested another super-yacht belonging to wealthy Russian commodities trader Gennady Timchenko was also seized near Sanremo, located not far from Imperia. Reuters corroborated the reports, though it cited only a “source with direct knowledge of the matter.”

While it’s unclear exactly what role the luxurious boats play in Moscow’s war effort, European officials have now gone after several, with the first grabbed in France at the port of La Ciotat on Thursday. It was said to belong to Igor Sechin, CEO of Russia’s state oil firm Rosneft.

It initially appeared a similar move was carried out in Germany soon after – where a 512-foot super-yacht belonging to Russian billionaire Alisher Usmanov was allegedly seized by authorities – but local officials have since dispelled those claims. The Ministry for Economy and Innovation for the German state of Hamburg confirmed the ship was not taken, however it did note that the vessel still required permission to depart and that “no yacht leaves port that is not allowed to do so.”

The flurry of Western sanctions on Russian banks, businesses, media outlets, senior officials and even lawmakers comes in retaliation to Moscow’s military action in Ukraine, which the Kremlin insists was launched with the purpose of “demilitarization” and “denazification” of the country.

Kiev said the attack was unprovoked, maintaining it had no plans to retake the break-away Donetsk and Lugansk regions by force following years of grueling blockade that claimed thousands of lives in Eastern Ukraine. Thousands of troops and hundreds of civilians have reportedly been killed in the fighting over the past week, and ceasefire talks have seen little progress, though the two parties were able to agree to a humanitarian corridor deal to allow civilians to flee active fire zones earlier this week.