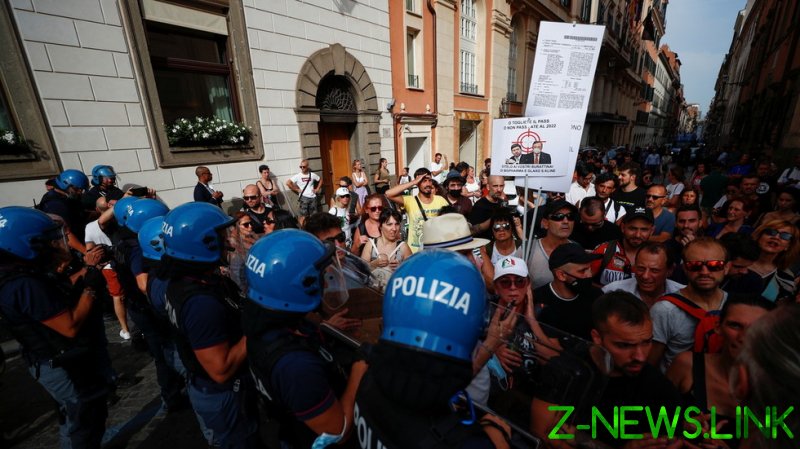 The Italian government announced on Thursday that the so-called Green Pass will be mandatory for teachers, university students, and people traveling using long-distance public transport from September 1.

Similar to the controversial health certificate recently rolled out by France, Italy’s Green Pass is a digital or paper document that shows if someone has received at least one dose of a Covid vaccine, has tested negative, or has recovered from the virus.

The ID became mandatory for most business and cultural venues on August 6, including museums, stadiums, cinemas, gyms and indoor seating areas at bars and restaurants.

Businesses neglecting to enforce the rule can result in fines for both customers and venues ranging from €400 to €1,000 ($470 to $1,180). Institutions that repeatedly violate the provision risk being closed by authorities for up to 10 days.

Health Minister Roberto Speranza said the decision to widen the rule to apply to schools and public transport was designed to “avoid closures and to safeguard freedom.”

Prime Minister Mario Draghi has taken aggressive measures to increase Covid vaccine uptake in his country. In March, the prime minister ordered that getting the jab would be mandatory for all health workers. The government has billed the health pass as a way to further drive up vaccination rates.

Like in neighboring France, the coercive policies have sparked several weeks of protests. Thousands took to the streets in Rome, Milan, Turin and Naples at the end of July to express their opposition to the health pass.

Demonstrations have continued in several cities. Several thousand people turned up for a protest in Turin on Thursday night, hours before the Green Pass was set to go into effect on Friday.

Italy registered 27 coronavirus-linked deaths on Thursday, compared to 21 the day before, the country’s Health Ministry reported, while the number of new cases rose to 7,230 from 6,596. Italy and numerous other countries have pointed to the more transmissible Delta variant to justify its controversial new control measures. However, the World Health Organization has repeatedly stressed that despite the rise in cases, there is no evidence that the strain has caused an increase in mortality.